Springsteen speeds to win over 76 competitors at WEF, Ward wins $380,000 GP and Little returns to win after bad fall 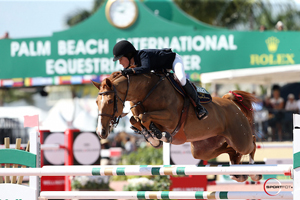 Jessica Springsteen on Tiger LilyOf the 76 entries in the speed class, 25 had clear rounds.

Brazil's Luiz Francisco de Azevedo on Collin was third in 59.42 seconds, and Shane Sweetnam of Ireland on Cobolt finished fourth in 59.65 seconds.

"I saw a lot of rounds before I went today," Springsteen said. "I knew what I had to do, which is always a nice advantage of going last. I actually added strides in places where other people left out, but she is just so fast on her own. I don't even have to kick; I just loosen the reins and she goes."

She showed her in Wellington for the first time last winter and spent last year traveling around the world.

"She’s very feisty," Springsteen said. "She always wants to go, so I have to do my best to keep her stride short and together. She is jumping again tomorrow, so I was not sure if I should go forward today, but she has so much energy that it was a good course for her. She felt great."

"I actually was not even supposed to try her," Springsteen said. "When Edwina and Jan were going to see her, I just decided last minute to go with them. I immediately loved her.

TWO-TIME Olympic team gold medalist McLain Ward rode his Rio Olympic team silver medal mount HH Azur to win the $380,000 Grand Prix CSI 5* for the second year in a row on Feb. 25. Beating a starting field of 39, 12 of which, including eight Olympians, three of the top-ten ranked riders in the world, and an Olympic champion, qualified for the timed jump-off.

Ward finished in 39.70 seconds, with Eric Lamaze of Canada on Fine Lady 5 second in 40.07 and, and Sergio Alvarez Moya of Spain riding Arrayan third in 40.10. Kevin Babington of Gwynedd Valley, Pa., riding Shorapur for Ireland, placed sixth in 41.37 seconds.

"I am thrilled with the mare," Ward said. "This is her first big start of the year. We gave her a little bit of a rest with the World Cup Finals in Omaha in mind. We have planned only two major weeks for her here.”

"For myself, I have to say I was probably a bit motivated tonight," Ward said. "I have been on a little bit of a four-fault run and getting a little frustrated. Eric has been winning everything. Sometimes Eric says I have a look; I think I had it tonight. I wanted it a little bit."

"I thought it was quite a well-balanced jump-off,” said Ward. “Eric and I have very different horses, and there were pros to the jump-off for both horses. There were long gallops at the beginning and the end, which were not that hard with my mare's stride, and her bravery and scope. For me, those hairpin rollback turns in the middle were much more of a concern, because with a big horse like mine I knew I was going to lose momentum. It was a fraction between us. I had a little bit of a lucky rub on the second to last fence, but I have been having some unlucky ones lately, so I'll take it."

CEDRIC, ridden by Laura Kraut to a team gold medal in the 2008 Olympics in Beijing, has been retired by Margaret Duprey of Cherry Knoll Farm.

"Cedric has been the horse of a lifetime for me," Kraut said. "He has been incredible, and I've learned not to give up and to persevere. It took a long time as he was a little bit slower to develop than your normal grand prix horse. He's been amazing, and I think I'll never have another horse like him."

"For me, one of the biggest career highlights with Cedric was him winning multiple Global Champions Tour grand prix events," Kraut said. "For him to win back-to-back huge grand prix competitions like that was a tribute to just how great he is."

Cedric, one of the nation's leading money winners, amassed well over $2 million in prize money won and, in major competitions of $100,000 or more, produced 81 clear and 45 double-clear rounds.

Jumping a course set by Richard Jeffery on the derby field at the Palm Beach International Equestrian Center, Little and Karen O'Connor's Clearwater topped a class of 34 and a three-horse jump-off to take victory. They cleared the short course in 39.27 seconds.

France's Marie Hecart and Myself de Breve stopped the clock in 41.96 seconds for second place. Mavis Spencer on Chacco finished third with five faults in the jump-off.

Saturday's win was a quick comeback for Little, who was leading the $100,000 Land Rover Wellington Eventing Showcase two weeks ago when she and her mount, RF Scandalous, had a bad fall on the cross-country course. Although RF Scandalous was unharmed, Little hit her head and took some time to recover.

"The last time I was out here I had a fall in the Eventing, so this is a little bit of redemption for me on the field," she said. "After the fall, I have been getting better and better. Yesterday was the first day that I really felt like I was back to myself. A week ago, it was dicey. I hit my head pretty hard. Luckily, I had an airvest on and a great helmet that really cushioned me. It could have been a lot worse, but here we are. We are still playing the game, and I am happy to be here.”

"It was a great course today,” said Little. “It was really exciting, and Clearwater is so much fun to ride in the jump-offs."

"He is young, but he really loves the fields,” said Little. “He has been a little bit unlucky over the last few weeks, but he has been getting progressively better over the last year. He has jumped some really big classes, so this was nice to back him down to the 1.50m."

"I knew that Marie's horse in particular can be very fast,” said Little of her jump-off round. “I have known that horse for a long time. It is clever, and fast, and Marie is always super competitive. Initially, I thought if I laid down a good clear round, Mavis would have to chase me, but then once I knew that Marie was in the jump-off, everything changed. I knew that I was going to have to lay down something that could win no matter how many people were in the jump-off. Luckily, he is a really quick horse. This was his first time out on that field, so he was a little bit lost, but he really looks. He is always looking for the flags; that is what we say about eventers."