FROM THE Thoroughbred Daily News

Hall of Fame jockey Javier Castellano has tested positive for the coronavirus, reports his agent, John Panagot. Castellano is the first North American-based jockey known to have come down with the illness. 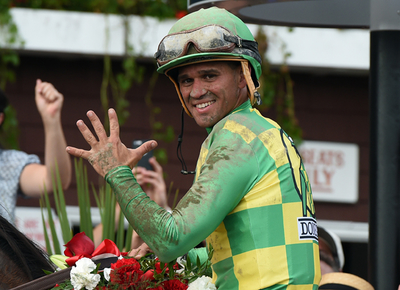 JavierCastellano (Photo by Susie Raisher NYRA)Castellano had been riding at Gulfstream, but Bill Badgett, the executive director of Florida racing operations for The Stronach Group, said that racing will continue at the South Florida racetrack. He said that Castellano has not ridden at Gulfstream since Mar. 15 and was tested on Sunday when he returned to Florida from New York.

“We put protocols in place where no jockey who had been out of town could ride here until they took a physical,” Badgett said. “The physical is where they discovered he had the virus, otherwise he still wouldn’t know that he was positive. The safety of the jockey and everyone else here is our main priority and it’s more important than racing.

“BUT THIS has nothing to with us. He was not on the property around the time he would have gotten sick and hasn’t been in contact with any other jockeys.”

Prior to riding at Gulfstream on the 15th, Castellano rode the Mar. 14 card at Oaklawn. New Orleans Saints head coach Sean Payton attended the races that day and mingled with some trainers, jockeys and TVG personnel. He has since tested positive for COVID-19.

Panagot released the news about Castellano on Twitter and wrote that his jockey is “asymptomatic and feels fine and healthy.”

“He jogged three miles on Wednesday and looked forward to the weekend,” Panagot continued. “He will self-isolate until he is medically cleared.”

Thursday afternoon, Castellano posted an optimistic update on his condition on Twitter.

“Orders to quarantine for the next 2 weeks,” he wrote. “I have had no known contact with anyone that has tested positive. I appreciate the support from everyone, including Gulfstream Park. Stay safe everyone and we will all get through this, God willing.”

Officials at Gulfstream Park issued a statement on the situation, saying: “Our thoughts go out to Javier Castellano today and we are so glad to hear that he is asymptomatic. At Gulfstream Park, we have been operating in full compliance with all executive orders issued by the state of Florida and have, in fact, initiated stringent measures for the protection of all of our essential personnel, including our jockeys. It is because of our strict protocols requiring all jockeys to be screened prior to entering the facility that Javier’s symptoms were recognized and he was able to be tested for which we know he is thankful. Javier last rode at Gulfstream Park on March 15th and has not been back to the property since. Javier will not be able to return to riding at Gulfstream Park until after his mandatory 14-day quarantine is complete and he has received a clean bill of health from his medical practitioner. We wish him a speedy and complete recovery.”