Michael Matz has a nice Allowance winner at Gulfstream while Bernie Houghton saddled four winners, all for family, at Penn National 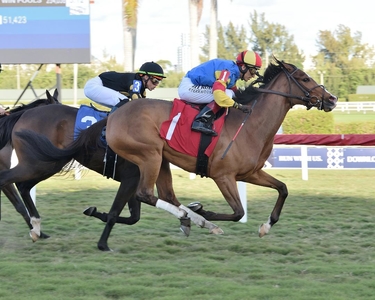 Beale Street winning at Gulfstream"I was pleased with her," said Matz. "She's probably run about 10 times, and she's been pretty consistent."

Beale Street has run 10 times with two firsts, two seconds and four thirds and earnings of $98.970.

"This was the first time we stretched her out," said Matz. "Maybe we'll  stretch her out again. Johnny (Valazques, her jockey at Gulfstream) said she could run all day. Maybe we'll try a stakes at Keeneland. There's a 1 1/2 mile stakes there at the end of the meet. We'll take a look at the entries and see how she'll fit there.

"She's a nicely bred filly," said Matz. "If we can put some black type on her, she would be worth quite a bit of money."

Beale Street is a 4-year-old filly by Quality Road out of Striking Tomisue, by Smart Strike.

BERNIE HOUGHTON saddled four winners from Feb. 1 to 22, one for himself, one for his sister and two for his mother, all Pa-bred homebreds.

The Houghtons will collect a nice amount of breeders' awards, particularly his mother Elizabeth (Betsy) R. Houghton,, whose Sylmar Farm in Christiana, Pa., breeds numerous mares each year ,selling most of them, then sitting back to collect the breeders' awards.

"We call it mailbox money," said Betsy. "We just walk to the mailbox and pick up all the checks for our Pa-breds that we've sold that have gone on to win."

Houghton saddled his own Octoraro Orphie to win a $27,100, 6 furlong Maiden Special Weight race for 3 year olds at Penn National by a nose on Feb. 1.

"He ran one time before and was fourth," said Houghton. "I'm going to try him longer next time, I'll try to find an allowance race for him. I think he's a nice horse."

"That was his second win," said Houghton of the 3-year-old filly. "She tries real hard. We'll try an allowance race for her next time."

The next evening, Houghton saddled another winner for his mother, Shark City, in a $15,400. 6 furlong Maiden Claiming race by  1 length at Penn.

"We put blinkers on him," said Houghton. "He ran twice before, no good. So we put blinkers  on him and he ran great, We;ll run him back at Penn in a Pa-bred race."

GRAHAM MOTION had two winners in mid-February, one in an allowance and one in a stakes.

Majestic Reason stalked the pace, took the lead at the sixteenth pole and drove clear to win by 2 1/4 lengths.

Duchess of Sussex vied for the lead from the start to take command in late stretch and held on to win by 1/2 length.

Elizabeth Barr bred Brandywines Secret, by Rimrod, who was claimed while winning first time out on Dec. 3, 2016, by Vicki Nightingale and is now owned and trained by Nightingale's husband Elbert Fenimore.