CHRISTIANA, Pa--Pocopson Station, bred by Betsy Houghton, owned by her Sylmar Farm and trained by her son Bernie, won an $18,100, 5 1/2 furlong Maiden Claiming race for 2 year olds at Penn National on Nov. 8. 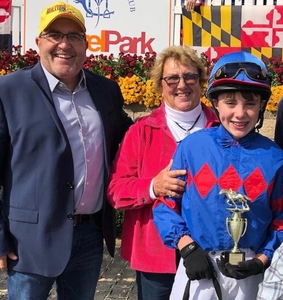 The Houghtons, Bernie, left, Betsy and Bernie's son Thomas "We bred him here," said Houghton of the gelding who was in for a price of $25,000. "He's by Friesan Fire out of Sabbath Bay, by Real Quiet.

"We really liked him, but we never thought he'd win first time out. We thought he'd need a race. He ran terrific.

"He was born and raised here. He's named for where I came from, Pocopson Station. My parents had a farm two farms down from the Lyman's. My brother Harry built a house on that farm, and he still lives there.

"Pocopson Station is a nice, big horse. In the beginning of the race, he didn't know what was going on, and then it suddenly clicked. I thought the other horse that Bernie trains, Life Master, was going to win. He led through most of the race but he finished third. I was glad when I thought he was going to win," said Houghton. "We  like his owner, Nicholas Fazzolari.

POCOPSON STATION, bumped leaving the gate, was second into the stretch and got up to win by a head over Daredevil Carl, who was ahead in front of third placed Life Master.

"I don't know where we'll run him next," said Houghton. "They run so few non-winners of two for 2 year olds at Penn. We'll just look for the best place for him."

"We had 45 mares here last year and foaled 38," said Houghton. "We foal about 40 each year. We have a real good set up for it. We don't take mares in to foal any more. All the mares have to live here."

Rated mid pack early on, Roses for Ruby moved three wide in the stretch and moved to the lead 70 yards from the tape to win by 1 3/4 lengths.

Although Trace, a 4-year-old mare by Ghostzapper out of an Arch mare,  runs in Debra Kachel's name, she is actually owned by Wendy and Ricky Hendriks and Ken Kachel, Debra's husband.

"I bought her at Keeneland last summer," said Wendy Hendriks. "She was third at Delaware and now won this. We're very pleased with her."

Trace settled off the pace on the backstretch, made a strong move around the turn, moved four wide in the stretch and won by 2 1/4 lengths.

Saguaro, by Union Rags, who was bred by Phyllis Wyeth's Chadds Ford Stable in Pennsylvania, won the $100,000, 7 furlong Pumpkin Pie Stakes for fillies and mares at Aqueduct on Nov. 9.

Making her first start in New York since running second in the Shine Again this summer at Saratoga, Saguaro Row rallied from last to win.

Breaking from post 6, Saguaro Row was last of seven while the the favorite Philanthropic set fractions of 22.88 seconds for the opening quarter mile with the half going in 46.32.

The 4-year-old was four-wide into the turn, set into a drive in the late stretch and rallied to win over Philanthropic to win by 4 1/4 lengths in 1:25.36.

"She broke a little slow," said jockey Joe Rosario. "I rushed her a little bit to get her into the race, and then I let her do what she wanted after that. She tried very hard."

Owned by Newton Anner Stud and Mark Breen, Saguero Row  picked up her first career stakes victory and third win of the year from seven starts and boosted her career earnings to $214,104.

"She's a nice filly. We were always confident in her," said Jose Vargas, assistant to winning trainer Michael Stidham. "Joel knows her very well. She trained well into this race. It's no surprise that she ran like that because she was training so well and she got the job done."