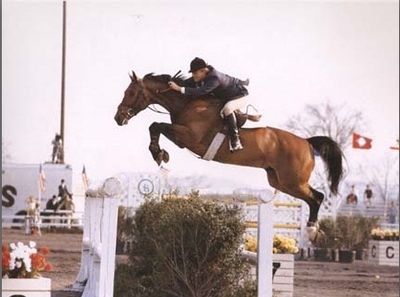 Rodney Jenkins had a very successful career as a show jumper before turning to trainingShimmering Aspen, a 5-year-old mare by Malibu Moon, won the $100,000, 6 furlong Tax Free Shopping Distaff Stakes by 1 1/2 lengths.

She won that Stakes for the second year in a row, running her record to nine wins, including five stakes, one second and four thirds from 20 starts and career earnings of $415,660.

"We bought her as a yearling," said Jenkins. "We campaigned her as a 2, 3 and 4-year-old and this year. She's a very nice mare. We retired her after her win at Delaware Park. Mrs. Charles will probably breed her."

THE MD-BRED 4-year-old gelding now has eight wins, including four stakes, two seconds and two thirds, including one in a G3 Stakes, from 17 starts and career earning sof $424,890.

"We also bought him as a yearling at the Timonium sale," said Jenkins. "He's a nice horse. It took him a while to run really well. He's a big, long, lany orses. He's just beginning to come into himself. He's very honest."

"He got a nice third in the G3 Pimlico Special Stakes on Black Eyed Susan day at Pimlico," said Jenkins. "We'll probably run him in the Maryland Million Classic. After that, we'll see what there is for him this winter. Knock on wood, he's a really sound horse, so we can keep him going."

Jenkins is a very successful trainer after retiring from show jumping, where he was one of the most successful riders ever, riding through the 60s, 70s and 80s and being voted into the Show Jumping Hall of Fame. 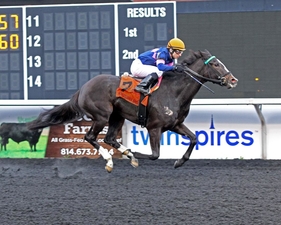 China Silk (Photo by Coady Photography)"We always quite liked her," said Sheppard. "She's a homebred of the Moorheads by More Than Ready. We ran her once as a 2-year-old, and she was third, and then we put her away for the winter."

"We took her to Camden, and she had some minor problem," said Sheppard. "Then we took her to Saratoga, and she was walking off the track after training, and a couple of horses breezing went right behind her and scared her, and she reared and fell over backwards. She just had superficial cuts, but that slowed her training."

"We'll just take it one step at a time with her," said Sheppard. "Her next race will probably be an allowance for horses that haven't won two races. She's pretty fresh now."

Graham Motion had two allowance winners, Strike Me Down and Lucky Jingle.

Rating fourth early, Strike Me Down took command at the sixteenth pole and went on to win by 3/4 length.

Far back early, Lucky Jingle went five wide on the turn and drew off to win by 3 1'4 lengths.