BENSALEM, Pa--Math Wizard, the second longest shot on the board in Saturday’s $1 million Pennsylvania Derby, pulled off a gigantic upset when he won the G1 stakes by a neck at Parx Racing. 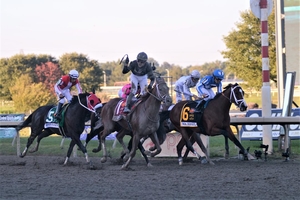 Math Wizard, left, wins the Pennsylvania Derby (Photo by Alix Coleman)Ridden by Irad Ortiz Jr. and trained by 32-year-old South Florida-based Saffie Joseph Jr., Math Wizard rallied down the center of the track and shocked the field that included Preakness Stakes winner War of Will, the beaten favorite in the Kentucky Derby and Preakness, Improbable, and a colt that came in with four straight wins, Mr. Money.

“I’ve got to retire now!” an emotional Joseph said after Math Wizard became his first G1 winner in his first G1 start. “I feel blessed. I’m at a loss for words.”

Math Wizard hadn’t won since Jan. 31 at Gulfstream, when he scored by 18 3/4 lengths and was claimed for $25,000 out of that race by his current ownership group led by John Fanelli, who calls Parx his home track.

“THIS IS my biggest win ever,” Fanelli said. “I was screaming so loud, I lost my voice.”

Math Wizard won with a six-wide move into the stretch. 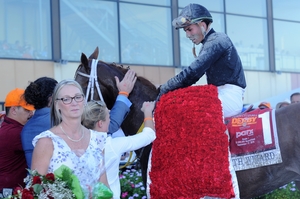 Math Wizard in the Winner's Circle (Photo by Alix Coleman)He ran down the early pacemakers Mr. Money and War of Will, rallying into slow fractions.

“It was great," said Ortiz. "I got a perfect trip to be honest. He broke, put me in a good position. I saw the favorite didn’t break and I didn’t panic. I just said, ‘he’s going to come from somewhere. He’s just not forwardly placed in front of me.’ He got through inside of me and from there I just tried to follow him. Then on the backside my horse jumped on the bridle. When I put my hands down he jumped on the bridle and I said, ‘whoa, wait a little longer.’ I wanted to wait a little longer and not get inside of Improbable so I just wait, wait, wait and at the half mile I made my way outside of him. He was coming little by little but when he turned for home and he switched leads then he took off. He ran hard. When I turned for home and I opened the reins and he started taking off I said, ‘I’m going to get there.’ ”

“To me, what was surprising was that the pace was not fast and that horse came from out of it,” said Mark Casse, the trainer of War of Will.

Ortiz picked up the mount Saturday as Florida-based Edgard Zayas, who was named to ride Math Wizard at entry time, was not at Parx Saturday.

Math Wizard arrived at Parx Thursday with his trainer. 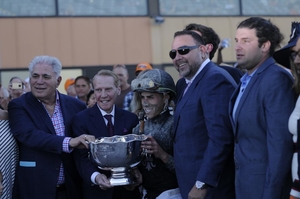 Pennsylvania Derby trophy presentationThe only horse that went off at longer odds in the field was the maiden Shanghai Superfly, who finished last at odds of 90-1, and every other horse in the field went off at single-digit odds.

Mr. Money, the 8-5 second choice, finished second for trainer Bret Calhoun and jockey Gabriel Saez, and War of Will was third for Casse and Tyler Gaffalione.

“Obviously disappointing,” Calhoun said after Mr. Money’s four-race winning streak ended in his first G1 start. “No excuses. We just got outrun. Kind of surprising to be outrun by a horse we beat pretty handily a couple times.”

Improbable, the 6-5 favorite, got off to a slow start after acting up in the gate and finished fourth, a neck in front of Spun to Run, who was fifth.

Improbable also encountered gate problems in the Preakness and he was a non-factor in that race.

“I don’t know why he does it,” Hall of Fame trainer Bob Baffert said by phone from California. “He doesn’t do it in California. Mike (Smith) said he was really good and then heard a noise and it set him off. It’s just frustrating when you go that far and he pulls that stuff.”

Math Wizard wasn't a definite starter until a few days before the race.

“This is my home track," said winning co-owner John Fanelli. "They asked us to run, but we wanted to. The reason we didn’t know was he was laying down in his stall and he wasn’t feeling himself, and we were going to push him but we said, ‘the worst case scenario would be we don’t come and it cost us a couple thousand dollars.’ And, if he feels good in the next couple of days, we will bring him up, and that is exactly what happened. He just got better and better.”

“John made the gutsy call to come here. It was a crazy call. Maximum Security scratched, and I was taking a nap that day. I woke up to all these crazy messages so I thought something happened at the barn when I saw all these messages. When I started reading them I realized. I still don’t believe it. I would’ve walked away happy with a third or fourth. It’s amazing.”

STREET BAND circled a field of one of the strongest groupings of 3-year-old fillies assembled in 2019 to win Saturday’s $1 million Cotillion Stakes, earning Sophie Doyle her first G1 victory and securing an automatic berth in the Breeders’ Cup Distaff. 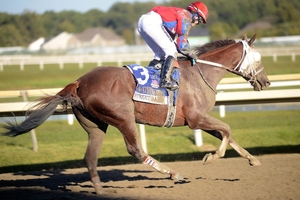 Street Band, out of Street Minstrel, by Street Cry     9Ire, wins the G1 Cotillion Stakes (Photo by Alix Coleman)The Larry Jones-trained Street Band, making her seventh start this year and sent off at 7-1 in the field of 11, tracked the field from the back of the pack early while Jaywalk set a quick opening quarter-mile in :22.75.

“I was very glad to hear (Parx announcer Keith Jones) say ‘very fast quarter’ because we were way back,” Jones said. “We knew there was a lot of speed in here, and I was waiting to see those fractions and he called it. By the time I could locate her he already said ‘very fast’ so I said, ‘ok, we’re still alive.’

“When she was moving that strong, and I know Sophie doesn’t ask that hard that early, when she was going by horses that fast I thought that when we were heading for home, we were going to be close.”

Turning for home Street Band was under a strong drive from Doyle with Guarana to her inside.

Street Band took the lead in deep stretch by a head after a mile in 1:37.44, holding off Guarana by 2 1/4 lengths at the finish.

Horologist, off her victory in the G3 Monmouth Oaks, finished third 3 3/4 lengths back.

“I was feeling good right here into the stretch,” said Jones. “When she was going by horses, she was running. We knew there was a lot of speed and we could let her run the whole way without taking her back. When I saw her come by last, I felt, ‘Boy, Sophie, you took her back pretty good.’