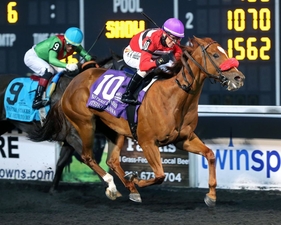 Hot Shot Anna (Photo by Coady Photography)Well placed outside, Hotshot Anna, ridden by Antonio Gallardo, was well placed outside, moved into a striking position three wide on the turn, made a steady gain and drove clear to win by 1 1/4 lengths over Talk Veuve to Me, trained by rodolphe Brisset, with Misericordia, trained by Jorge Duarte, Jr. another 3/4 lengths back in third.

Hotshot Anna also won the Presque Isle Masters in 2018, and she won the G3 Chicago Handicap both in 2018 and finished second in it this year.2019.

The5-year-old mare has now won six stakes since breaking her maiden at Canterbury Park in 2016. 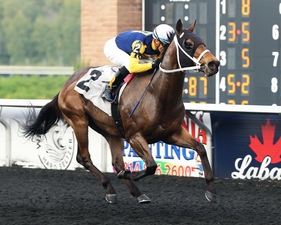 Richiesinthehouse (Photo by Coady Photography)Owned by Richard Ravin and Patricia's Hope LLC and trained by Larry Rivelli, Richiesinthehouse stalked the  pace on th eoutside, moved up between horses into the stretch and drew off late to win by 1 length.

Caloric, trained by Michelle Winters, was second, and Less Than Perfect, trained by Kevin Rice, was third, another 1 3/4 lengths back.

He has now won 12 races, mostly allowance races, and finished second twice from 17 starts with career earning of $296,950.