SARATOGA, N.Y.--Graham Motion, based at Fair Hill Training Center, capped off quite a day by winning a handicap and a stakes race at Colonial Downs after not only winning but also saddling the second placed horse in a $250,000 stakes at Saratoga. 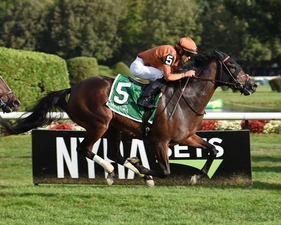 Mrs. Sippy (Photo by Coglianese Photos)Andrew Stone's Mrs. Sippy made her North American debut a winning one in Saturday's G2, $250,000 Glens Falls, at1 3/8 miles on the inner turf for fillies and mares 3-years-old and up at Saratoga.

Trained by Graham Motion, the 4-year-old by Blame began her career in England, trained by David Simcock, where she  won two of nine starts along with a good second in the Group 3 Princess Royal Nayef at Newmarket last September.

Sent to post at odds of 6-1 in the Glens Falls under jockey Joel Rosario, Mrs. Sippy settled at the back of the pack as defending champion Lady Montdore led the field through a half-mile in 49.80 seconds and three-quarters in 1:15.13 over the firm turf with recent G3 Waya winner Fools Gold tracking in second.

Mrs. Sippy moved on to the rail into the final turn as Santa Monica, the 8-5 favorite, rallied wide under Jose Ortiz.

Lady Montdore came on strong at the top of the stretch and battled briefly with Santa Monica before Rosario angled Mrs. Sippy off the rail to split the front runners en route to a 3/4 length win in a final time of 2:13.62.

EMPRESSOF THE NILE, also trained by Motion, rallied resolutely in the stretch to place second, 2 1/2 lengths in front of Santa Monica. . 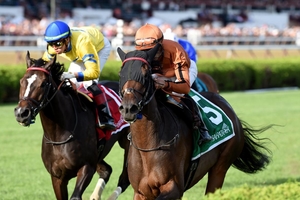 Mrs. Sippy, right, and Empressof the Nile (Photo by Coglianese Photos)It was the third Glens Falls score for Motion, who previously won with Rosinka in 2007 and and Humaita in 2004.

"Every time I looked away at my other filly, Empressof the Nile, Joel had crept up a couple of spots," said Motion. "It was an impressive performance and an impressive ride by Joel. She did everything right. I'll have to look for bigger fish because I thought her win today was very nice."

Rosario, who picked up his first Glens Falls win and eighth stakes win of the meet, said he felt confident in Mrs. Sippy throughout.

"She broke a little bit slow and then after that it was all her," said Rosario. "It looked like she just wanted to follow somebody the whole time. I just thought that's the way she's probably used to running in Europe. She did well for her first time here. Graham just told me to be comfortable where you are and take it from there. I knew I had to wait a little bit going into the turn, but she was able to pick up again and get going, kicking on to the wire."

Mrs. Sippy, bred in Kentucky by her owner, banked $137,500 in victory while improving her record to three wins and two seconds from 10 starts. 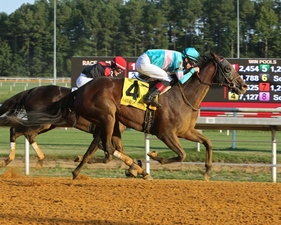 Cairenn (Photo by Coady Photography)Motion's next win came at a little after 6:30 in New Kent, Va., at Colonial Downs with Best A Luck LLC's Cairenn, ridden by Trevor McCarthy, in a $75,000, 7 furlong Handicap for fillies and mares 3-years-old and up.

Last early in the race, Cairenn swung five wide around the turn and closed to win by 1/2 length over Stormologist.

English Be, ridden by Jorge Vargas, Jr., stalked the pace, slowly gained ground around the far turn and through the stretch and dug in between horses to win by a head over Jais's Solitude with Credit Swap another 1/2 length back in third.

But Motion wasn't quite finished. 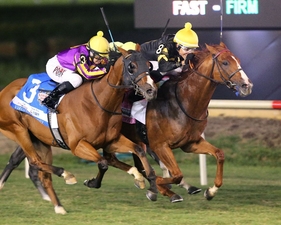 English Bee (Photo by Coady Photography)He won the last race on the card, $35,000 maiden Claiming race at 1 116 miles on the inner turf for fillies and mares 3-years-old and up with Augustin Stable's Sweeping In, ridden by Vargas.

Settlled off the pace, Sweeping In surged to the lead in the stretch to win by 3 lengths.

Michael Matz also had a stakes winner on Aug. 31.

Runnymeade Racing LLC's Postulation, ridden by Paco Lopez, won the $75,000 Presious Passion Stakes at 1 1/2 miles on the turf for 3-year-olds and up at Monmouth Park.

Postulation, second early on. commenced a two wide bid on the final turn, took over in early stretch and pulled away to win by 2 3/4 lengths over Lael Stables' Surprise Twist.

Ricky Hendriks saddled Debra E. Kachel's Cotton House to win a $15,000 Maiden Claiming race at i mile on the turf at Delaware Park on Aug. 29.

Cotton House pressed the pace outside the leader and drove away through the stretch to win by 1 1/2 lengths.

Running mid-pack, Union Salute was three wide into the stretch and finished stronly to win by 1 3/4 lengths.