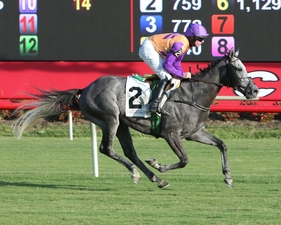 Lead Investor (Photo by Coady Photography)Gregorek'used to work for Sheppard, and she got the horse two years ago at Penn National.

He was in such bad shape that Gregorek'couldn't even see him jog.

Lead Investor had run 10 times in maiden claiming races, hitting the board only twice, finishing third in his first start at Delaware Park and then second in a Maiden race at Penn National.

Gregorek'gave him a year off and sent him to Sheppard to train.

Lead Investor ran over fences for the first time at Charleston on Nov. 11, 2018, finishing fifth.

He then was fox hunted throughout the winter, and he ran for the second time over fences at Foxfield on April 27, winning a maiden claiming race, followed by a win in a claiming race at Willowdale on May 12.

LEAD INVESTOR was returned to flat racing at Penn National in July, finishing fourth and second in two claiming races for a $25,000 tag.

It was back to steeplechasing on Aug. 17 at Colonial Downs, where he finished second in his last race before his win on Aug. 30.

"He's not a super horse," said Sheppard. "He's a nice, honest horse. He's not overly talented, but he's honest, and he pays his way."

Lead Investor stalked the pace on the rail, split horses turning into the stretch and drove clear with determination to win by 2 1/2 lengths over Querry Horse, trained by Lesle Young and ridden by Jack Doyle, with Shoreline, trained by Ricky Hendriks and ridden by Sean McDermott, another length further back in third.

In the $30,000, 2 1/4 mile Maiden Special Weight, also on Aug. 20 at Colonial Downs,Knockholt, trained by Jack Fisher and ridden by Willie McCarthy, just held off a fast closing Silver Crescent, trained by Young and ridden by Doyle, to win by a nose.

Drilliant, trained by Paul Fout and ridden by Barry Foley, finished third, another 5 3/4 lengths further back.

Sudden Victory, trained by Jule Gomena and ridden by Kieran Norris, went out to a big lead from the start, leading by 10 lengths on the backside, and he was still 9 lengths in front in the stretch, but Kienan steered him to the fence in the stretch, which had been the final fence in previous jump races at Colonial Downs.

Knockholt inherited a considerable lead when Sudden Victory  left the main course to jump an uninvolved hurdle, and he just lasted under a drive for the win.