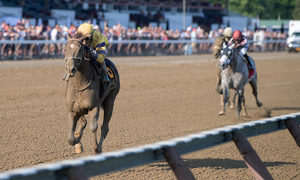 King Zachary draws off to win the Birdstone (Photo by Tod Marks)That was the third win of the day for Motion, who trains at the Fair Hill Training Track.

"King Zachery is a horse that we got over the winter,: said Motion. "He ran okay in his debut for us at Churchill, and then we ran him in the Stephen Foster, which was quite a leap up. I thought he'd need more distance, so I wheeled him back quite quickly into the Birdstone, and it worked out quite well. They don't run many races at that distance."

Reserved in the two path early, King Zachery began picking up rivals on the backstretch the second time around, moved between horses up to the leader at the half pole mile and went on under a hand ride to win by 8 1/2 lengths.

"Empressof the Nile is a filly that we bought over the winter," said Motion. "She's a filly we liked a lot. We started her in a stakes and then dropped back to an allowance. I think she's stakes material. we'll probably run her back in the Glens Falls."

Empressof the Nile ran fifth early, ran four wide on the far turn, then seven wide turning into the stretch and closed strongly to get up in the final strides to win by a neck.

King of Egypt was up close throughout the race and won by 1 1/4 lengths.

Motion won two races on Aug. 9, both Allowance Optional Claiming races, one at Saratoga and one at Laurel.

"Malakeh is another that came over the winter from Florida," said Motion, "I was quite surprised when she was beaten when we ran her at Keeneland. She definitely looks like a stakes caliber mare."

Malakeh was four wide into the stretch and inched away late to win by 3/4 lengths.

"Scholar Athlete is a barn favorite," said Motion of the 6-year-old gelding. "I'm surprised he came around so late. He's been training great in the mornings. We'll probably run him back in an allowance."

Scholar Athlete went to the lead on the backstretch and won by 3/4 lengths under a drive.

Trolly Riderated back in the early going, saved ground through the turn and edged up in the final strides to win by a nose.

Beale Street settled off the pace, was five wide on the turn and was up late to win by 2 1/4 lengths.