FAIR HILL, Md.--On a gorgeous day for racing, Mrs. S.K. Johnston Jr.'s Amnicalola, trained by Jack Fisher and ridden by Mike Mitchell, beat the favorite, The Fields Stable's Sarah Joyce (Ire) by 2 3/4 lengths in a field that scratched down to only four runners in the featured $50,000 Iris Coggins Memorial filly and mare hurdle stakes. 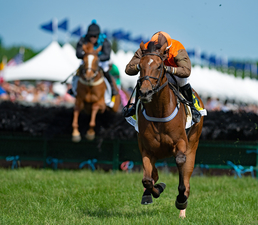 Amnicacola driving to the wire in the Coggins  with Sarah Joyce in the background (Photo by Tod Marks)"They left all the good ones in," said Fisher as he left the paddock. "I was hoping it would be the other way."

The Saturday races at Fair Hill featured betting, and Sarah Joyce was the clear favorite, but Fisher didn't need to hope that it might have been the other way, as Amnicalola fired through the stretch to catch Sarah Joyce, who had opened up a 2 length lead two fences from home but couldn't keep up with the fast closing 6-year-old mare by Arch.

"The plan was to just to try to get her jumping nicely and to get in rhythm, and just to get her confidence up," said Mitchell. "“I was a little worried that Sarah Joyce got away on the lead."

Mavoureen, owned trained and ridden by Bethany Baumgardner, led throughout most of the 2 1/4 mile race until Sarah Joyce came to her three from home, and she finished third.

FISHER AND Ricky Hendriks each won two races on Saturday, and Fisher has now increased his lead in Trainer, Races Won to 26 over Jonathan Sheppard and Hendriks with seven wins each.

Sheppard has had to miss a lot of racing as his West Grove stable and training center were quarantined after a horse died there, and a swab of his nose showed a trace of herpes.

An autopsy showed that the horse, Sheppard's homebred Out the Back Jack, died because a hole in hi rectum abscessed and burst in his stomach.

A lot of horses have a trace of herpes but are not contagious, and Pennsylvania may have over-reacted when it quarantined Presque Isle for there weeks because two of Sheppard's horses were sent there just before his barn was quarantined.

ELIZABETH VOSS saddled Robert A. Kinsey's No Wunder (GB), ridden by  Jack Doyle, to win the $40,000 Valentine Memorial by 2 3/4 lengths in 4:12 over Harold Via's Hinterland, trained by Fisher and ridden by Mitchell.

That was the last race ever to be run on this course, as the land is now being torn up to build a new, state of the art facility for racing and eventing.

"This was our first win of the year," said Kinsey. "When I saw him in the paddock, I thought we could win. I started getting excited when I saw Jack begin to move up."

Fisher and Mitchell teamed up to make it two wins on the day for them when Rather Be Racing's Our Legend (Ire) won the $30,000 4-year-old Restricted Hurdle by 1/2 length in 4:21:3/5 over Mrs. Johnston's Knockholt, also trained by Fisher and ridden by Willie McCarthy.

Our Legend raced in Ireland through March 19 before being imported.

"He came this spring," said Fisher. "Sean McDermott was the bloodstock agent. Rather Be Racing, a group of seven people, said they wanted him, so I bought him."

Rosbrian Fram's Teodoro (Ire), trained by Hendriks and ridden by Ross Geraghty, completely dominated the $30,000 Maiden Hurdle, leading throughout, often by double digits, and winning with ears pricked by 14 lengths in 4:09:3/4, the fastest time of the day.

Khafayya, owned by Sharon Sheppard (no relation to Jonathan), trained by Leslie Young and ridden by Barry Foley, was second.

"Chucky Lawrence told us about him," said George Mahoney, owner of Rosbrian Farm. "He was being trained by Tom Morley at the Fair Grounds, so Ricky and I went down and bought him."

"He's a wonderful horse to work around," said Hendriks. "He's a super horse. He'll go to Saratoga for the non-winners of two."

Hendriks also saddled the winner of the first race, his Morning Star Farm's Shoreline, ridden by Geraghty, who won by 9 3/4 lengths over Marsha Hewitt's Camp Courage, trained by Arch Kingsley and ridden by Foley.

"They have horses with Gordon Elliot in Ireland," said Hendriks. "They told me, `If Gordon says you're okay, you're okay.' So now they are racing in this country, too."

"I got him after Charleston, when I was rebuilding my stable," said Hendriks. "He ran at Colonial Downs, and he was third at Willowdale in the mud. He's a racetrack horse, so he likes firm ground."

"This is the first sanctioned win for Meriwether," said McDermott. "I bought him for Meriwether in Ireland. He was good enough today. It's great to see another Irish horse win."