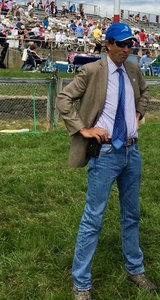 "He's won easier every time, too," said John Fisher. "I asked Mike if this was his first rider over timber, and he said it was the first one he'd finished."

"The plan was to just get him in rhythm," said Mitchell. "He's a nice, classy horse."

Hadden Frost had ridden Scoodic in his previous two races over timber.

"Hadden told me that he can jump to the right, so just point him left," said Mitchell.

"I've always loved this horse," said Dolly Fisher. "When Jack said he was going to try him over timber, I asked him if it would be okay to call Edie Dixon."

Edith Dixon bred Schoodic and owned him throughout his hurdle racing career.

"I CALLED Edie and asked her if I could buy Schoodic, and she said `You can't buy him, but I'll give him to you," said Dolly Fisher. "It's fun sharing this with Jack."

John Fisher said that the fun thing was that Edith Dixon loved watching him win over timber and tried to watch all his races.

Scoodic won the 3 mile race by 6 1/2 lengths in 5:56:4/5 over Charles Fenwick's Royal Ruse, trained by Sanna Neilson and ridden by Gerard Galligan,

Jack Fisher also trained the winner of the $10,000 Timber for amateur apprentice riders, also at 3 miles.

" Overwhelming was a stakes winner over hurdles," said Fisher. "We tried steeplethon with him. He's a good horse for an amateur rider. Brett did a good job on him"

The first of two flat races for 3 year olds and up to be ridden by amateur riders, both at  1 1/4 miles, was won by Ballybristol Farm LLC's Silver Crescent, trained by Leslie Young and ridden by McLane Hendriks.

Silver Cresdent won by a head in 2:18:1/5 over Diplodocus, owned by his father Ricky's Morning Star Farm, trained by Ricky Hendriks and ridden by Archie MacAuley.

Hendriks said that this was his first race in this country.

"He ran well on the flat over in England," said Hendriks, who gallops horses for Young. "He was traveling well all the way. I wanted the other horse (Diplodocus) to make the first move. I never had to hit him. He's going to run over fences."

McLane was his father's influence on him was "Huge."

He started me riding in pony races," said McLane.

Ricky Hendriks saddled his Good and Proper, ridden by Elizabeth Scully, to win the second flat race by a nose in 2:13:2/5 over Willow Oaks Stables LLC's Master Gunner, ridden by Archie MacAuley.

"Good and Proper started at Willowdale," said Scully, who gallops for Hendriks. "He was third. The plan here was to get on the inside, which I didn't do, but he was on the bridle the whole way. I'm so grateful to Ricky. He's just had this horse for a few months. I've been riding him on the flat. He's schooling over fences, but I haven't ridden him over fences."