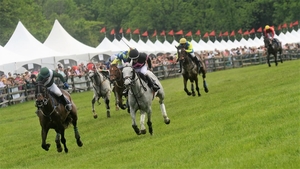 Pured It, left, holds off favorite Le Chevalier to win the Radnor Hunt Cup (Photo by Alix Coleman)Pured It, owned by Sycamore Run Farm and Move-Up Stables, went right to the front at Radnor and lead all the way, holding off a strong challenge by favorite Le Chevalier, owned by Michael Smith, trained by Julie Gomena and ridden by Kieran Norris, to win by a neck in 7:13:1/5 in the 3 1/4 miles race.

Pured It had run third in the Willowdale Stakes the week before.

"The ground was better today," said Keating. "The plan was always to run him in these two races. I could have won last week at Willowdale, but with the going so deep, if I had won, I wouldn't have had any horse left for today."

In the $35,000 National Hunt Cup Allowance Stakes at 2 1/8 miles, Corky Lemon, owned by Heather Austin and Peter Austin, trained by Mark Beecher and ridden by Willie McCarthy, won by 1 3/4 lengths in 4:15:3/5 over Soluble, owned and trained by Neilson and ridden by Sean McDermott. 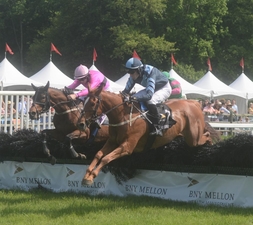 Corky Lemon, right, leads Soluble over the last fence in the Nationa Hunt Cup (Photo by Alix Coleman)"Corky Lemon won the maiden race at the Queens Cup," said Beecher. "I heard after that he was for sale, and I had a couple of people who wanted to buy a horse. I've only had him for three weeks."

"He's a very nice horse," said Becher. "He's run three times and won twice. We might run him over the summer, or we may put him away until the fall. He's a really nice horse, so we want to do what's best for him."

The $1,500 Leading Rider Award went to Mike Mitchell, who won three races at Radnor, starting with the first race, the $30,000 Milfern Cup Hurdle for maidens at 1 1/8 miles.

"We got this horse this past winter, back in November," said Sheila Fisher. "He had fractured his knee, so he had the winter off. Then he ran second in a point-to-point. He's still a maiden on the flat, so maybe we'll run him in a flat race."

Maccabee, owned by Mason Hardaway Lampton, trained by Lillith Boucher and ridden by Richard Boucher, won the $30,000 Thompson Memorial Ratings Handicap at 2 3/8 miles by 2 lengths in 4:46: 4/5 over Stormy Alex, owned by Irv Naylor, trained by Cyril Murphy and ridden by Graham Watters.

"He was stronger today," said Richard Boucher. "He ran a couple of races whee he just galloped along in back. There wasn't much pace today, and he pulled me up near the front over the fourth from the last, right behind the leader. He was still traveling well. This was his first time at 2 3/8 miles, so I was a little concerned about that."

"I just let him pop over the last few hurdles, and he showed a good turn of foot at the end," said Boucher.

Av A Word, owned by Naylor and trained by Murphy, won by 4 /12 lengths in 4:05:4/5 over First Friday, owned by Beverly Steinman, trained by Doug Fout and ridden by Barry Foley.

"My horse was good," said Mitchell. "He settled nicely and jumped well. He's only a small horse, so I kept him covered up until the stretch. He made a nice run for it in the straight."

In a finish where  a blanket could have been thrown over the top three horses,Brooklyn Speights won by a neck in 4:07:3/5 over Knockholt, owned by Mrs. S.K. Johnston, trained by Fisher and ridden by McCarthy, with Argentic (Fr), owned by Wendy Hendriks, trained by Ricky Hendriks and ridden by Ross Geraghty, another neck back.

"He's been a very consistent horse," said Mitchell. "He pulled me to the front, He jumped great. He really had to fly through the stretch."