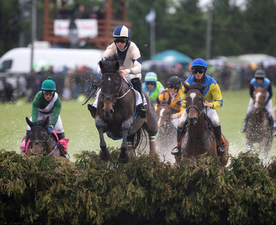 Jonathan Sheppard also trained a winner at Willowdale, as well as two at Iroquois the day before to move into second in Trainer, Races Won with seven wins, but still far behind Jack Fisher, who has 17 wins.

It was a cold, rainy and very windy day, with the temperature at 47 degrees feeling more like the 30s with the rain and wind, but despite that there was a good crowd in attendance and very few scratches in the races.

"I've been to point-to-points and races in England and Ireland and all over here, and this is the worst I've ever seen," said George Mahoney, whose Rosbrian Farm had one horse running at Willowdale.

Just Wait and See went to the front in the 3 1/2 mile timber stakes and was never threatened, winning by 6 lengths over Bruton Street-US' Lemony Bay, trained by Fisher and ridden by Hadden Frost from a field of seven in 8:13:4/5.

"Richard has asked me to ride this horse before," said Beecher, who was on Just Wait and See for the first time. "He was second in the Steeplethon at the Gold Cup, and I saw Richard as he was coming back from the race. I told Richard that if Just Wait and See came out of that race good that he should run him at Willowdale. Then I got a phone call later saying he was entered and would I ride him."

"HE WAS GETTING 10 pounds here, and he's a good jumper," said Beecher. The timber course at Willowdale includes brush fences and a brush water jump as well as the natural timber fences. "He's an Irish-bred, so he's probably run in the wet before."

"The rain falling keeps the ground loose," said Beecher of the going which was soaking wet with puddles but at least not too holding.

Artic North won the Maiden Claiming by a neck over Sharon Sheppard's Mr. Fine Threads, trained by William Santoro and ridden by Graham Watters in 5:00 from a field of 10.

"He's a nice horse," said Beecher. "He ran on the flat and won over $300,000. I've had him for three months. He transitioned from the flat very well for me. He was third in a point-to-point before this. This is great for his owner. He's our farrier, and this is his first win under rules."

Sheppard's win at Willowdale came with Lead Investor in the featured hurdle race, the $20,000 Rose Tree Cup Conditioned Claiming race that drew a field of five.

Taking The Lead Stable's Lead Investor was saddled by Keri Brion as Sheppard was suffering from a bad cold.

Ridden by Tom Garner, Lead Investor won by 7 1/4 lengths in 4:54 over Irv Naylor's Ocean Ready, trained by Cyril Murphy and ridden by Watters with Ebullience, also trained by Sheppard and owned by Riverdee Stable, third.

"He just keeps getting better and better," said Brion. "Aaron Sinnott rode him at Foxfield, where he won, but Aaron got concussed yesterday, so we got Tom Garner to ride. Aaron coached him. Lead Investor is a trier, he tries hard all the time."

"I am the single Taking The Lead owner," said Heather Gregorek, who used to work for Sheppard. "I always tell people he doesn't like me. He likes Irish men. I've had him for three years."

"We got him at Penn National," said Brion. "He was free. He was so lame we couldn't even see him move. Heather gave him some time off. We ran him at Charleston last fall, and then fox hunted him through the winter, He came back better."

Indigo Heart, owned by Ricky Hendriks' Morningstar Farm, trained by Hendriks and ridden by Paul O'Neill, won the first race, the $10,000 Liam Magee Apprentice Rider Allowance, which was the first of three 2 1/4 mile hurdle races which were followed by three timber races, the last two at 3 miles..

"I bought this horse from Arch Kingsley last summer," said Hendriks. "He's been great to me. He won at Fair Hill Point-to-Point with Eve (Ledyard) riding, and he won the featured race at Aiken, so he's now won two sanctioned races."

"He's been a delight," said Hendriks. "He got a beautiful ride from Paul."

Indigo Heart won by 3 1/4 lengths in 4:48:3/5 over Soluble (Ger), owned and trained by Kathy Neilson and ridden by her daughter Skylar McKenna, in a field of seven.

Awesome Adrian won by 17 1/4 lengths in 6:27:3/5 over Colt Lightning (Ire), owned by Bruton Street-Us, trained by Todd Wyatt and ridden by O'Neill from a field of nine.

"Adrian won at Cheshire Point-to-Point," said Neilson. "He was bred by Nancy Reed."

Kiplin Hall's Katnap (r), trained by Dowling and ridden by Paul Cawley, won the Marshall W. Jenney Memorial Foxhunter's Chase Timber in a cake walk over a very spread out field of 10.

Katnap won by 43 3/4 lengths in 8:32:4/5 over Grand Manon, owned by Armata Stables, trained by Billy Meister and ridden by John Brophy, who had led for much of the race..

"It wasn't easy to talk him into it," said Mahoney.

"Katnap came over here to run at Far Hills," said Griswold. "He had a pretty good record. He's run over the Aintree course. He's a lovely old horse."