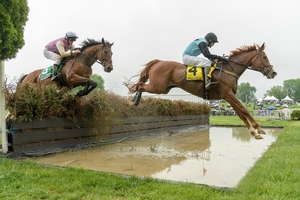 The gates at Willowdale Steeplechase open at10 a.m., and Jack Russell Terrier races begin the days festivities at 10:30 followed by three sets of pony races beginning at 11:30.

Following the pony races, there are six races sanctioned by the National Steeplechase Association,  three hurdle races, the first at 1:30, and then three timber races with the final race, the Foxhunters Timber, scheduled for 4 p.m.

Hanno, ridden by Quinn Scala, won the Steeplethon at the Queens Cup Steeplechase in North Carolina on April 27, but he has plenty of competition in the 11 horse field at Willowdale, including three others trained by Fisher, Political Theater, Lemony Bay and  Two's Company.

LEAD INVESTOR won comfortably by 8 1/2 lengths at Foxfield in Virginia on April 27, but he also has strong competition in the six horse field, including another trained by Sheppard, Ebullience.

Cyril Murphy is saddling two of Irv Naylor's horses in the Rose Tree Cup, Ocean Ready and Av a Word.

The first race is The Liam Magee Allowance Hurdle for Apprentice Riders, and it drew a seven horse field.

Skylar McKenna has had a hugely successful first year of riding in open company, and she is up on Soluble, owned and trained by her mother Kathy Neilson.

The second race, The Folly Maiden Claiming Hurdle, has 10 entries with 12 on the also eligible list.

The Rose Tree Cup is the third race, followed by the Willowdale Steeplechase, the first of the three timber races.

The Landhope Cup for Maidens is the fifth race, and it drew 10 entries with nine also eligibles.

Carnival Carl, trained by Mark Beecher, won at Fair Hill Point-to-Point and is looking to now break his maiden under rules.

The Marshall W. Jenney Memorial Foxhunter's Chase Allowance Timber is the final race, and it drew 12 entries including Aquies, trained by Neilson, who won the Benjamin H. Murray Memorial at the Grand National on April 20.