THE PLAINS, Va.--In a stunning display of brilliance, Rosbrian Farm's Optimus Prime, trained by Ricky Hendriks and ridden by Ross Geraghty, won the $75,000, G2 David Semmes Memorial at the Virginia Gold Cup on May 4, winning by 8 3/4 lengths without ever appearing to have to get into top gear. 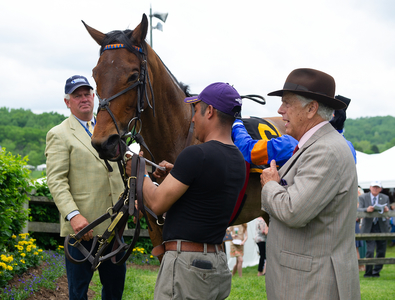 Ricky Hendriks, left, and George Mahoney, right, with Optimus Prime after the Semmes Memorial Stakes (Photo by Tod Marks)"The race went the way we had hoped," said George Mahoney, owner of Rosbrian Farm. "This horse is a very special horse. He's a very fast horse, and now he has shown he can carry weight. He carried 12 pounds more than the second and third placed horses."

Optimus Prime carried 156 pounds, with Portrade, who pulled up before the finish, carrying 148 pounds and all the others in the six horse field carrying 144 pounds.

"I'm fortunate to have Ricky and his team," said Mahoney. "If Optimus Prime stays sound, he could be anything."

"He's special," said Mahoney. "He puts out his own press releases. He walks around the paddock like a perfect gentleman."

Optimus Prime galloped around the course in mid-pack , easily going to the front over the second to last fence and cruising to an easy victory in a very impressive performance.

"I don't think Ross ever even chirped to him," said Mahoney.

Sempre Medici, owned by Irvin Naylor, trained by Cyril Murphy and ridden by Graham Watters, set the pace for most of the race and finished second, and Straylight Racing’s Invocation, trained byWilliam Santor and ridden by Sean McDermott closed  from the back of the field to finish third.

Hendriks said they had given Optimus Prime some time off after the Ferguson and then trained him through the winter at his Morningstar Farm in Unionville, Pa.

"Next, he's going to Saratoga for the A.P. Smithwick and the Turf Writers," said Hendriks. 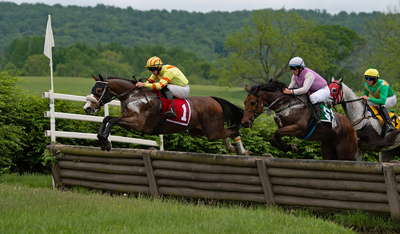 "I had to go to the front today," said Doyle. "He was taking too much out of himself in behind. He's a very classy horse. He didn't come out of second gear until the second to last fence."

'I'm delighted," said Young of her first time winning the Gold Cup. "He's a gift that keeps on giving. I got him as a 3-year-old. He won the steeplethon here last year, but he had a hairline fracture of his hock after the race, and he went to New Bolton. That's why you didn't see him last fall."

"I didn't want him to do the steeplethon again after he was hunt in it, and he jumped timber well, so we put him in this race," said Young.

"We'll put him away for the summer and run him in the fall, probably again at the Gold Cup," said Young.

"I was just a passenger," said Garner. "He jumped very well for his first time over hurdles. He's definitely one for the future. I pushed him out a bit at the end as this was his first race and I wanted to teach him to finish hard."

"I found him when I was in Ireland," said Shepard's assistant trainer Keri Brion. "I talked to Jonathan about him, and he said that I had to call Mr. Moorhead (owner of Buttonwood Farm).

Brion called Moorhead and sold him on buying Clondaw Camp.

"He wasn't cheap," said Brion. "It was all my doing, so I was very, very nervous going into this race. I said to Tommy, `He's ready to run.' He came from a point-to-point background, so he's probably not as fast as these American horses. Just use his galloping and jumping."

Michael Mitchell won three races at the Gold Cup to go into the lead in Jockeys, Races Won with eight wins to Doyle's six.

With two wins, Fisher increased his lead in Trainer, Races Won to 13 over Neilson and Young with four apiece.