The Grand National draws a field of 13 top timber horses 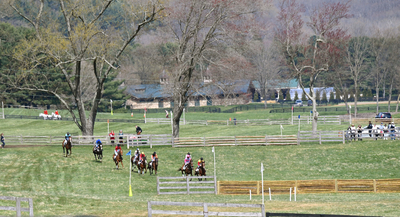 Trained by Joe Davies and ridden by Eric Poretz, Senior Senator already has two wins under his belt this year, one at the Cheshire Point-to-Point and the other at Elkridge-Harford.

Twelve top horses will face Senior Senator in the second leg of the Maryland Timber Triple Crown, including Raven's Choice, a former winner of the Hunt Cup, who runs from the one post.

The race is 3 1/4 miles over stiff timber and is open to 5 year olds and upward ridden by an amateur.

Post time is 3:15, and the card of three races will be streamed live.

THE SECOND race, the $20,000 Benjamin H. Murray Memorial Allowance at 3 1/4 miles for horses which have never won two races over timber, also has 13 entries, three of which, Sovereign Fund, Gas Can Eddie and Out Playing, are cross entered in the Grand National.

The third and final race is the $10,000 Western Run Plate Allowance at 3 miles for horses ridden by amateur apprentices will be run at 4:45.

The weather should be perfect for an exciting day at the races, and a large crowd always attends one of the most popular meets on the spring calendar.