MONKTON, Md.--Jack Fisher saddled two winners at My Lady's Manor on April 13, including one for his mother, Dolly Fisher, and moved into the lead in Trainer, Races Won, with five wins to Kathy Neilson's three, and maintained his lead in Trainer, Money Won, with $103,750. 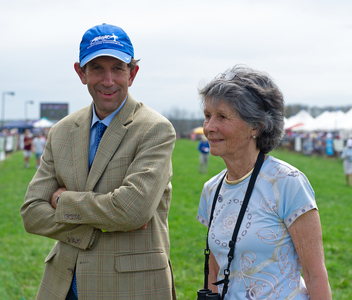 On a beautiful spring day, before a huge crowd, all four races at the Manor had close, exciting finishes, with the biggest margin of victory being 1 1/2 lengths.

"In my wildest dreams, I never would have dreamed of that," said Dr. John R.S. (Johnny) Fisher, Jack's father who is retired from training, of Schoodic's win.

Schoodic was a multiple graded stakes winner over hurdles for his breeder, Edith R. Dixon, but timber racing is a new venture for him.

Fisher also trained him when he ran over hurdles, and his last start over hurdles was just five months ago at Montpelier.

"We've owned Schoodic for about a month," said Johnny Fisher. "I've won this race before, but that was when I was riding."

SCHOODIC, who showed great determination to run down Satish in the stretch, won the three mile race in 6:48.

"This was so good," said Johnny Fisher. "This was a huge step up for him. I was so scared he'd get hurt. That was class, both from the horse and the rider."

Scoodic's first start this year was in the Fox Hall Farm Cup's Team race, where he was ridden by Brett Owings, and his team finished last, and then his first start over timber was at Green Spring Valley on March 31 in the Novice race, where he lost his rider, Owings.

Hyggelig Haven was the island of horses in Gulliver's Travels, and it is owned by Michael Lund and his wife Charlene Peterson.

"We've had Political Theater for two years," said Peterson. "He won at a point-to-point last week."

"He came to me needing wind surgery," said Mary Marten, who is Hyggelig Haven's trainer on the farm. "He also needed a little help with his jumping. His win at Green Spring was his first win over fences."

He loves racing," said Frost. "He really digs in. He was a little unruly and spooky at the point-to-point, but he was very professional today. He's a big galloping horse."

Mark Beecher rode Upland Partner's Mystic Strike, trained by Todd McKenna, to win the 109th running of the $50,000 My Lady's Steeplechase Amateur Timber Stakes by 1 1/4 lengths in the very fast time of 6:18:2/5 over Blair Wyatt''s Witor, trained by Todd Wyatt and ridden by Poretz, with Bruton Street-US' Lemony Bay (GB), trained by Fisher and ridden by Owings, third.

Odds on favorite Doc Cebu, owned by Fenwick, Hankin and Noell and trained by Fisher, lost his rider, Frost, at the second to last fence while in the lead.

According to Duncan Patterson, the Chairman of the Delaware Racing Commission, the judge at the fence said a child started to run out on the course, and his mother ran out after him, which he felt distracted Doc Cebu.

Poretz claimed foul against Mystic Strike but it was disallowed.

"What a thrill," said Bill Wylie, one of the owners of Upland Partners along with Sally Wood, Pete Mather and Mary McKenna. "Mark saved so much ground. Mystic Strike tries so hard."

"He jumped well," said Beecher. "He did everything I asked."

Wyatt saddled Prime Prospector, owned by Peter A. Jay and his daughter Sarah M. Jay and ridden by Paul O'Neill, to win the $10,000 John D. Shapiro Memorial Amateur Apprentice Timber by 1 1/2 lengths in 6:24:2/5 over Stand Down (Ire), owned by Frank A. Bonsal, trained by Davies and ridden by Poretz, with Carrickboy, owned by Ricky Hendrik's Morning Star Farm, trained by Hendriks and ridden by McLane Hendriks, third.

"It means everything to win here," said Wyatt, who lives just down the road from My Lady's Manor. "I've had this horse for six or seven years. He ran over hurdles. He's an old standby. I got him when he was 4, and he's 11 now."

"I was hoping that he'd win this race," said Wyatt. "He's a special horse. His ears are always pricked."