CAMDEN, S.C.--Team Ollie's Orchestra Leader, trained by Jonathan Sheppard and ridden by Keri Brion,was impressive in his win in the $25,000 Ratings Handicap Hurdle at the Cup Runneth Over steeplechase meet on April 6. 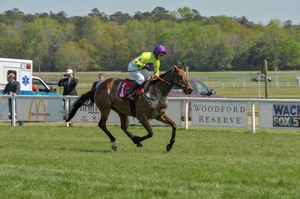 Orchestra Leader and Keri Brion (Photo by Elisabeth Harphram)While the official  winning margin was 3/4 length, the win was easier than that, as Orchestra Leader landed over the last fence with his ears pricked and never looked like he could be caught.

"He's a great little horse," said Brion, who claimed the 10-year-old in 2017 and put together a syndicate, of which she is a part, to keep the horse.

Orchestra Leader was trained by Jimmy Day last year, but as he is cutting back a bit, Brion took him back to Pennsylvania last November, to Sheppard's, where she works as assistant trainer.

"He fox hunted all winter," said Brion. "We just let him be a horse again. We weren't sure we were going to run him agai this year. We just let him tell us what he wanted to do."

"He's in Jonathan's program now," said Brion. "Jimmy did a great job with him, but just changing things up helped him."

ORCHESTRA LEADER has run on the front end in past races, but in Camden, Brion let him break off easily in mid pack, and she worked her way forward  to run on or near the front through most of the race.

"We ran him in a point-to-point a couple of weeks ago, and he did the same thing," said Brion. He ran a great race in Camden. It was a very tough race with 14 very good horses. His jumping is what sets him apart. He gave me a couple of massive fences on the backside."

"We'll probably run him next in the three mile race at Nashville, where he was third last year," said Brion.

Fisher saddled Mrs. S. K. Johnsto's Amnicalola, ridden by Mike Mitchell, to win the $20,000 Filly & Mare Maiden Hurdle and moved up to a tie with Kathy Neilson in Trainer, Races Won, with three wins apiece, and he leads in Trainer, Money Won.