Top show jumpers will have to rearrange their schedules due to the postponement of the Tokyo Olympics and Aachen Horse Show. 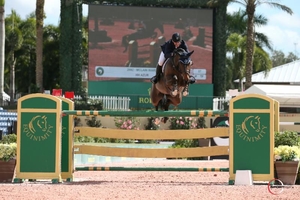 McLain Ward, shown here on HH Azur, is one of the top show jumpers aiming towards the OlympicsThose hoping for a spot on the Olympic team held their top horses out of competiton in Florida to have them peak in July and this lost valuable prize money, and they will now have to replan their schedules.

The USEF has also extended the suspension of USEF recognized events to May 3.

Race horse owners and trainers have been impacted by the loss of racing in Pennsylvania and Maryland, and now Aqueduct has also cancelled racing until April 5, and racing in Ireland has been cancelled until April 19.

That's a loss for those of us who enjoyed watching international racing on TVG while Stay at Home regulations continue.

The postponement of the Olympic and Paralympic Games is unprecedented in modern history, and we know that there will be many challenges ahead, but remain committed to working with the USOPC and the FEI to ensure the success of our teams and athletes in 2021.

We are deeply disappointed for our athletes and their teams, the coaches, support staff, horse owners, sponsors, and USET Foundation donors and supporters who have wholeheartedly dedicated themselves to the Olympic and Paralympic dream, but in the face of adversity, our athletes continually persevere and we know they will be prepared to represent our country to the best of their abilities next year.

We also understand that this decision will impact many, and as we wait to understand the revised approach of the IOC and Organizing Committee in the coming weeks, we will continue to provide updates and information to our athletes, stakeholders, sponsors, and fans. This is a trying time for our community and we look forward to the incredible feeling of watching our athletes inspire others and embody the Olympic and Paralympic spirit next year in Tokyo.

AACHEN HORSE SHOW in Germany, scheduled for May 31 - June 9 has been postponed with no new date yet announced.

“For quite some time now, we have already been in intense communication with the International Equestrian Federation FEI, the German Equestrian Association, the authorities and our partners,” said Frank Kemperman, Chairman of the Aachen-Laurensberger Rennverein e.V. (ALRV), organisers of the CHIO Aachen, and Michael Mronz, General Manager of the CHIO marketing company, the Aachener Reitturnier GmbH (ART).

The original venue date at the beginning of June cannot be adhered to.

“It makes no sense to stick to the planned date, the current and future health and safety of all persons involved in the show has absolute priority for us,” reported Frank Kemperman. "Our primary goal is thus now to organise the CHIO Aachen at a later date in the year."

THE USEF announced that the original 30-day suspension that became effective March 16, is being extended through May 3.

Effective March 24, all USEF owned events, selection trials, training camps, clinics and activities will be suspended through May 3, consistent with recommendations by the CDC.

Due to the importance of keeping the members of our equestrian community and their families safe, USEF strongly recommends that competition organizers suspend all USEF licensed competitions across the country and that equestrians do not compete for this same time period.

For those competitions that choose to run and can do so in accordance with the CDC, State, and Local recommendations, there will be no accumulation or points, scores, money won, qualifications, or rankings toward any USEF award programs, USEF owned events, or selection to a US team during this time period.

While farms and the agriculture and food supply chains are considered essential, commercial and recreational riding centers and stables should prepare to suspend their operations to the public.

Horse care, boarding facilities and other operations that provide self-care boarding for privately-owned horses are considered essential and should continue operations while implementing safety measures that promote social distancing and other best practices.

NYRA announced on March 24 that live racing at Aqueduct Racetrack will be suspended through at least April 5 due to the continued impact of the coronavirus (COVID-19) pandemic in New York.

As a result, the G2, $750,000 Wood Memorial, previously slated for April 4 at Aqueduct, has been postponed to a date yet to be determined.

"While this decision is necessary, NYRA is working hard to determine when we can return to racing while prioritizing the health and welfare of everyone involved in our operations," said NYRA CEO and President Dave O'Rourke. "I would like to thank the trainers and backstretch community who are caring for the horses stabled at Belmont Park during this period of great uncertainty."

On March 19, NYRA announced live racing at Aqueduct was suspended following the confirmation that a backstretch worker who lived and worked at Belmont Park tested positive for the coronavirus.

The Belmont backstretch is home to 585 workers, who tend to the essential daily care of the more than 1,300 thoroughbreds stabled on the property.

Access to enter Belmont Park was restricted to Gate 6 and all workers, including licensed horsemen, that do not live on the backstretch are subject to a standard health assessment including temperature check

The Belmont Park grounds are closed to ship-in horses with the exception of horses in extenuating circumstances subject to the approval of Martin Panza, NYRA's Senior Vice President of Racing Operations.

In addition, NYRA has confirmed with its vendor, Triple Star Horse Feed, that feed supply for horses stabled at Belmont is guaranteed during this time of uncertainty.

The Belmont Park backstretch and its facilities remain open to horsemen and operational for training.

Owners will not be permitted access to the backstretch until further notice.