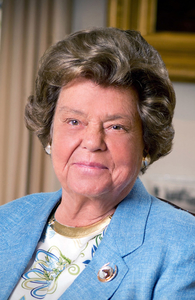 "It was a beautiful and very crowded service," said Russell Jones, who had been a good friend throughout Moran's life, not only with her but also with a number of her children.

"The service lasted almost two hours," said Jones. "The family participated, and the theme was how important family was to her."

MORAN was deeply involved in many aspects of equestrian sport, from foxhunting to steeplechasing, flat racing and breeding.

Moran was a longtime foxhunter, hunting with Radnor, which was founded in 1883 and is the oldest active, recognized hunt club in the U.S.

On the flat, Moran had as much success.

Moran's Creme Fraiche, purchased as a yearling at Fasig-Tipton July, was her most illustrious racehorse, winning the 1985 Belmont Stakes, trained by Hall of Famer Woody Stephens.

His Belmont victory, the fourth of five straight for Stephens, was achieved over Stephens-trained Stephan's Odyssey and 2-year-old champion Chief's Crown and came while Betty Moran was relatively new in flat racing.

“I was spoiled too quickly, too soon,” she told the Blood-Horse. “I was speechless when he won.”

Retired at 7, Creme Fraiche was retired at Brushwood.

He was visited by fans bringing his favorite treat of mints until he was put down in 2003 at age 21.

He was buried at the farm in the handsome memorial garden at Bryn Clovis across from Brushwood.

Moran and Brushwood are credited with more than 600 runners on the flat and over fences and nearly $6 million in earnings.

Other Moran 0wned race horses included a Danehill Dancer colt she bought in 2003 and named after her friend Jeremy Irons.

Jeremy was a multiple-group 1-placed runner and stood at the Irish National Stud before he died in 2014.

Another Brushwood-bred was stakes winner Bernstein.

A son of Storm Cat bought in utero with the Affirmed mare La Affirmed out of the Keeneland November sale in 1996, Bernstein raced for Michael Tabor and Betty Moran, multiple group-placed before a lengthy shuttle stud career.

“If ever a definition of a philanthropist is needed, just describe Betty Moran,” Thoroughbred Charities of America founder Herb Moelis told Main Line Today about Moran. “All you need to do is ask and Betty steps forward.”

Over 40 years ago, Moran stepped in to help revive the flagging Radnor races, linking the May event to the local Brandywine Conservancy, increasing purses, bolstering volunteer rolls and pulling in bigger and bigger crowds.

For almost four decades, the Brandywine Conservancy has been the sole beneficiary of the Radnor Hunt Races.

But her devotion to philanthropy doesn’t stop there.

A founding member of the Chester County Community Foundation, Moran received the Jordan Award for Philanthropy in 2000.

She served on the boards of the Devon Horse Show, Bryn Clovis Charity Foundation, Paoli Hospital, Community Volunteers in Medicine, Operation Warm, Home of the Sparrow for homeless mothers and the Chester County Food Bank.

In 2009, she was honored by the Salvation Army for her tireless service, and she received the Lifetime Achievement Award from the Association of Fundraising Professionals.

In 1942, she and her father moved to “Brushwood Farm”, then a dairy farm, in Willistown Township, and holidays and summers were spent in Barryville, NY, with her cousin, Joan and her extended Ranney family.

She spent much of her free time loving farm life and animals of all kinds.

Her early years she lived with The Sisters of Mercy at Mater Misericordiae in Wynnewood (now Merion Mercy) with her beloved nuns, Sister Frances Marie and Sister Stella Marie, and then as a boarder at The Shipley School, where she met some of her closest friends.

She loved to share stories of her pals and her athletic prowess playing first team in every sport, she was a “fierce” competitor.

Betty went on to attend Mary Washington College, Va., and on a visit home met and fell in love with Max Moran at St Patrick’s Church, Malvern, as he passed the collection plate.

Their lives became a whirlwind of children, animals of all kinds, trips to the beach in Avalon, horse shows, fox hunting and non-stop activity that Betty thrived on and Max took in stride with a sense of humor.

Her love of horses took her from fox hunting and pony club at Radnor Hunt Club and weekend horse shows, with all of her kids in tow, to steeplechase racing and then on to a very successful flat racing career, under Brushwood Stable.

Her proudest moments in racing were winning the Belmont Stakes, The Pennsylvania Derby, The Arlington Million, The Jockey Club Gold Cup and The Grand National in England.

Betty had a competitive edge that she shared with her “Pigeons”, a group of fiercely competitive, fun loving women who spent hours competing at Backgammon, Bridge and Rummykub and any other game they could work up, with or without rules.

The collective children of these women watched in awe of friendships that were steadfast.

“Pidge”, as her friends called her, had a passion for travel and a thirst for adventure, which took her around the world, but her favorite places to visit were “out west” or Maine with family and good friends.

Betty Moran was passionate about things that moved her, and she was committed to supporting her community in a way that made a direct impact on people and how they lived, particularly in Chester County.

Thorncroft, Home of The Sparrow, Chester County Boy Scouts, The Barn at Spring Brook Farm, Community Volunteers in Medicine, The Chester County Food Bank and many other remarkable organizations were the beneficiary of her time and her contributions.