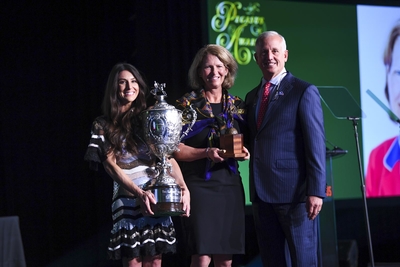 Beezie Madden, center, is presented with the Stub Trophy by Murray Kessler (right) (Photo by Taylor Pence/US Equestrian)Nick Haness of Temecula, Calif.,was voted the 2019 National Equestrian of the Year. and Madden and Boyd Martin won the William C. Steinkraus Trophy.

Madden and Haness were presented with the Robert P. Strub Trophy at the Pegasus Awards during the U.S. Equestrian Annual Meeting.

In 2019, Madden represented the U.S. at the Pan American Games in Lima, Peru, and helped anchor a team of rising U.S. jumping stars in their first major championship.

There, Madden and teammates Lucy Deslauriers, Alex Granato and Eve Jobs won the team bronze, while Madden also went on to win individual bronze on Breitling LS in Lima.

Earlier in the year, Madden and Breitling LS placed in the top five at the Jumping World Cup Final in Gothenburg.

She also became the first rider to win the $1 Million HITS Grand Prix in all three locations offered following her win with Darry Lou at HITS Thermal.

The William C. Steinkraus Trophy is presented to an equestrian competing in the Olympic disciplines of dressage, eventing, or show jumping. 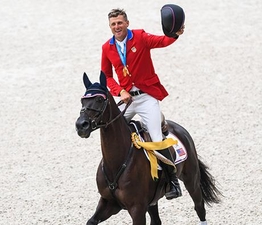 Martin collected two wins at the Bromont CCI Three-Day Event: one in the CCI4*-L with Ray Price W and one in the CCI3*-S with Barry.

Martin and Tsetserleg were selected for the U.S. Eventing Team for the 2019 Pan American Games and won their final preparation event at the Maryland International CCI3*-S before heading to Lima, Peru.

There they delivered a phenomenal performance, helping the U.S. Eventing Team claim the gold medal.

Also, Martin earned his first individual medal of his career by winning the gold.

"I can't reiterate enough what a fantastic team I have behind me," said Madden. "One of my favorite moments of 2019 was the Pan Am team medal. We had three rookies there in Eve Jobs, Lucy Deslauriers, and Alex Granato, and we were there with teams trying to qualify for the Olympic Games with all their best riders. And we came away with the bronze. We had the gold in our sights at one point, and we let it slip away, but that night, with those kids, we celebrated with medals around our necks and toasted their first medal and first world championship. I thank them for that experience."

HARNESS, owner of Hunterbrook Farms, has become a household name on the show hunter circuit, amassing an impressive record in 2019 and fulfilling his lifelong dream of becoming a successful, well-respected professional in the sport.

Early in his career, Haness won the 2006 USEF Show Jumping Talent Search Finals - West, and also was fourth at the 2006 ASPCA Maclay Final, before going out to his own to start a now thriving business.

"Horses can be purchased, ribbons can be bought, but you cannot buy respect from your peers. 2019 was an incredible year and I am forever grateful," said Haness. "This is a complete dream come true. I never dreamed in a million years that this moment would be my moment. Thank you to the horses that have been instrumental to my entire life. I am so grateful. This award means more to me than you can imagine."

Georgina Bloomberg of New York, N.Y. was awarded the USEF/EQUUS Foundation Humanitarian Award, and Judy Richter of Bedford, N.Y., was awarded a Pegasus Medal of Honor, an annual award to recognize individuals who have exhibited outstanding service to horses and the sport through their dedication, and Tim Dutta, sponsor of the Fair Hill International 3-Day Event, won the Sallie Busch Wheeler Trophy for distinguished service to equestrian sport.