UNIONVILLE, Pa--The celebration of life memorial for Louis (Paddy) Neilson III, held on the kennel lawn of Mr. Stewart's Cheshire Foxhounds, drew so many that, despite hundreds of chairs, big crowds still stood at the back. 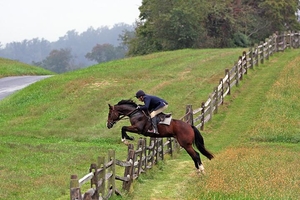 Paddy Neilson flies anotherIt was a appropriate site, as Neilson was MFH and whipper-in for Cheshire.

"There must be a thousand people here," said master of ceremonies Eli Silberman.

One of the basic themes of those that spoke was Paddy's courage in all things throughout his life.

His brother, all five daughters and lifelong friends Jay Griswold, Turney McKnight and Doug Small as well as members of the First City Troop Francis Jacobs and Richard Walkup reminisced about their life with Paddy.

Neilson was born in Glen Cove, Long Island, but the family moved to Maryland when he was about 7, and later Neilson moved to Pennsylvania.

"WHEN PAD called me to tell me his news, he said `I can  look back over my 77 years and have no regrets," said his brother Cook. 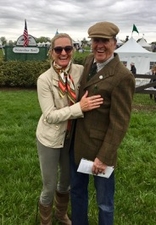 Sanna and Paddy NeilsonAll his lifelong friends had amusing stories.

"When we were kids, Pad hit me in the lip with an arrow," said Cook. "He said it was an accident, but I wasn't sure. But then Paddy ran his face into a pitchfork I was holding. That was an accident."

"We'd just been to the store to buy bubble gum," said Griswold. "You has a big wad inside your mouth or you would have been badly hurt by that arrow."

"Pad has a big sense of humor, a big heart and latent intelligence," said Griswold. "I say latent because the intelligence didn't come out until the later years."

"Paddy was the dominant timber rider of our generation," said McKnight. "He should be in the Hall of Fame. What's held him back is the salty language he used towards officials, in particular starters. Maybe when they all die he'll get in."

"We used to sleep overnights in a converted chicken coop," said Small. "We'd hide under the blankets and shoot BB guns at each other."

"It was handy to have a Dad that loved you unconditionally," said Kathy Neilson, who said "Toinette toldall of  us to keep it together,"as she choked up momentariiy. "Whether it was the ice skating rink in freezing weather or a boiling hot day at the races, he'd be there for his daughters and grandchildren. He had unconditional love for Toinette, his children and his grandchildren."

"Perhaps one of the best choices Dd made was sobriety," said Sanna Neilson. "The other best choice was Toinette. She was the winds beneath his wings."

"He was thrilled when asked to be Master of Cheshire," said Sanna. "He loved his girls and took pride in his grandchildren. We jumped the double at Brooklawn one day out hunting, and after he said, `My grandchildren jumped it better than anyone else."