NEW YORK, N.Y.--Two appalling stories about two horsemen appeared in two different New York newspapers on Friday, Aug. 9, one appalling in it's violence and the other even more appalling in its travesty of justice as it goes against every assumption of `innocent until proven guilty.' 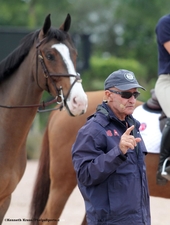 The second story is about George Morris, who was barred for life from competing nationally and internationally.

Even worse, Morris can no longer give his most sought after clinics, as anyone attending one of his clinics would also be barred for life.

That deprives Morris of his livelihood.

Morris was never warned that there was any investigation, and SafeSport will not tell the accused who is accusing them, meaning the accused has no recourse.

Morris only found out about it when he was told he was barred for life.

THE TIMES story claims that Morris was disbarred for sexual relations with a minor from 1968 to 1972, and that there have been decades of whispers about that misconduct.

First, those people close to Morris have never heard any whispers of sex with a minor, much less decades of whispers.

Morris wrote a long, very open book about his  life and loves, and while there have been many loves, none of them are minors.

The N.Y. Times claims to know who accused him, Jonathan Soresi and  Dean Faiello an ex-boyfriend of Michael Hart.

Soresi is a registered sex offender who battles intravenous drug addiction who previously accused Morris in 2012 and later recanted his story.

Faiiello, who is currently serving a 20 year sentence for assault in the first degree and practicing medicine without a license, claims that Hart bragged to him about his sexual relations with Morris.

Hart was jailed for drug dealing and died in 1995 of AIDS-related illnesses at age 37.

So Morris, a team silver medalist at the 1960 Rome Olympics, trainer of many of this countries finest equestrians, many of them Olympic medalists, and coach of U.S. Olympic Team medalists and a gold medal winning team, has been disbarred for life, without recourse except arbitration and without being allowed to defend himself, on the word of two low lives, one a registered sex offender and drug addict and the other in jail for 20 years.

Appalling is not even beginning to describe this miscarriage of justice.

Many of this sports biggest names have leaped to the defense of Morris, and this story is just beginning.