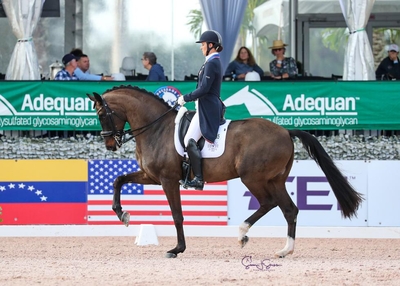 Adrienne Lyle on Salvino (Photo by Susan Stickle)All three top grand prix finishers scored over 70 percent, with Lyle and Salvino topping the list with a 77.5 percent as the last to compete.

The class was a qualifier for the FEI World Cup Grand Prix Freestyle, which takes place under the lights on Friday night during the first of the “Friday Night Stars” series.

“He’s just always so incredible in the ring,” said Lyle of her mount from the Tokyo Olympic games. “He went in again today with another mistake free test. He really clicked into the rhythm for the piaffe and passage work. I think we still have more in the tank for the freestyle, so I’m excited about that."

“It should be nice and cool weather tomorrow with a packed house, and he loves both those things,” said Lyle. “The piaffe, passage and last centerline were super. I love feeling him finishing a test with that much energy and enthusiasm.”

Sarah Tubman on First Apple finished second with a score of 70.5 percent, and Sweden’s Caroline Darcourt posted a score of 70.283 percent on Lord Django to place third.

Five competitors scored in the 70 percent range, but Darcourt on Bournonville topped the list with a 73.029 percent.

“It feels very good to be back in Florida, it’s been three years since the last time I was here,” said Darcourt. “I’m very happy to be here with this horse and the win, I would say, was over my expectations. I’m really thrilled about it.”

“Bournonville’s been with us since he was late7, and he has a very sensitive side," said Darcourt. "Now I feel he’s finally secure with me and he really likes the ring and his job. He is so rideable and has all the qualities."

“I would say the trot work felt very fluid and he was with me the whole time and really listened to me,” said Darcourt. “The canter work and the first pirouette I was happy with, but there is more to work on. With him, the goal now is to keep moving up.”