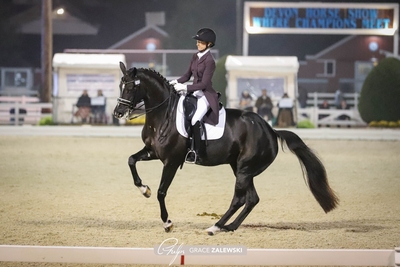 Canada’s Vanessa Creech-Terauds was first in the ring with Fleur de Lis L, a 13-year-old Hanoverian mare, and scored a personal best of 71.02 percent, setting the bar for the remainder of the class.

Creech held the lead until Tarjan on Serenade MF, her own 9-year-old Oldenburg mare, scored 76.515 percent for her  harmonious routine and fitting instrumental music.

Megan Lane on Zodiac MW, an 18-year-old KWPN gelding, scored 75.22, but was not quite able to overcome Tarjan to place second. 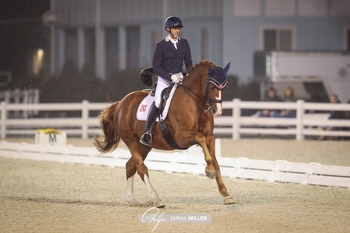 Michael Bragdell on Qredit Hilltop (Photo by Emma Miller)As Bragdell and Hilltop galloped across the diagonal to Coldplay’s “Hymn for the Weekend,” the crowd roared, applauding the noteworthy performance.

“I think the balance was a little more uphill," said Tarjan. "I got lost multiple times, poor horse, so I have to ride a little bit better I think. She did her job as usual. I got a little lost but it’s a freestyle, so I guess it’s not so obvious. It’s a really difficult freestyle, Marcus made it for us. But on that horse, I think it’s possible to do it. She’s a really cool horse, she tries her heart out for you and she’s really on the aids so you can ride a freestyle that difficult.”

“I’m thrilled," she said. "It’s not something I ever expected. I’m still not able to get in the test what I am able to get in the warmup, and I think the idea is you want to be able to ride the test at just the same quality that you get in the warmup and can get at home. The horse is young, and so just to be able to hold the consistent balance throughout the entire test and get the same quality we do at home and in the warmup. I think you follow where the horses go and where they lead you, and all you can do is try to set the horses up as best you can and put them in the best situations. All I can do is try and train my horses as best I can and try to present them in the ring, and follow that.”

“I loved it, it was fun," said Bragdell. "Qredit was great. I just want to come in here and have fun, and just be thankful to have the chance to ride here and enjoy this awesome crowd. So I trimmed down my warmup quite a bit and thought, ‘I’m just going to do something nice and easy.’ I have to trust it, and it felt great, we finished so strong. And the crowd is just unbelievable, I mean it’s so much fun. It’s a wonderful thing. I got my personal best in the CDI score, so of course I want to win but it’s still fun to come here…when the horse is performing for you and the crowd is cheering you on the way you do, you can only smile.”

“Today, I was a little calmer, more settled, and I think that helped Qredit perform a bit better," he said. "I think my pirouettes were better. I still had a little bobble at the end of the one’s but I love how that test finishes, with the extended canter into the piaffe and then turns, and he just really comes into it in the end there. It’s a super feeling, you can really just completely let go. He knows it.”

“I’ll probably go down to Tryon," said Bragdell. "And I’m sure everybody is aiming for Omaha, so why not. That would be super exciting, and to be on the home turf…that would be extra special.”

The CDI3* Grand Prix Special was first of the two evening classes.

Argentina’s Micaela Mabragana on Diamond Rosso, a 12-year-old Hannoverian gelding, once again won with a score of 66.766 percent.

Mabragana was given several high marks of 7.5 for her passage, one and two tempis, and her transitions, even scoring some 8s for her halt and one tempis.

Before the competition began, Australian horseman Guy McLean gave another exhibition of special horsemanship with his four-horse team.

McLean demonstrated impressive feats with the horses, only one of which he rode while the others followed his instructions without tack of any kind.