U.S. dressage team had a rough beginning at the World Championships

HERNING, Denmark--The U.S. Dressage Team had a rough first day of championship competition in Herning, with two of the four team riders competing today and the final two set to compete tomorrow. 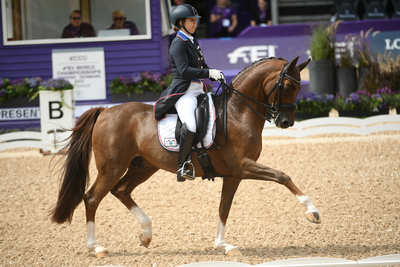 Katie Duerrhammer (Photo by Allen MacMillan)Katie Duerrhammer of Greenwood Village, Colo., on Quartett received a 70.838 percent in their debut for the team, but Ashley Holzer of Wellington, Fla., on Valentine had a very bad test after Valentine became tense in the trot tour and struggled to regain composure, so Holzer received a 61.285 percent, to finish 43, or last of the first two groups of riders, leaving the team far behind.

In her championship debut with Quartett, Duerhammer produced a harmonious test, earning a score solid enough to place them in fourth at the conclusion of the first rotation of combinations.

She eventually finished11th after the completion of the first two rounds of competitors.

Of her first championship appearance, Duerrhammer said that Quartett rose to meet the atmosphere of the large stadium in Herning, and even with two small mistakes, the pair still showcased a quality test to the judges.

“I’M SUPER happy with him," said Duerrhammer. "This is his first time being on a championship team and my first time on a championship team, so to go in there and put down a solid ride. It wasn’t a mistake-free test, but that’s okay. He tried really hard for me. His trot tour is always a highlight for me. It always feels so easy and effortless, so that was the highlight.” 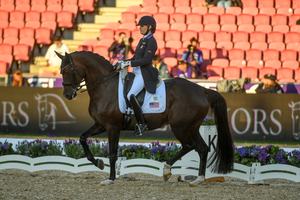 Ashley Holzer (Photo by Allen MacMillan)"I am super proud to be the path-finder for the US team, me and my horse are doing our first championship, and the arena feels amazing, so beautiful," she said. "We really did a solid trot tour; this is where my horse shines. I am from Denver Colorado in the mountains, so Herning is very different, but I really love the cold here, it is fantastic."

Duerrhammer said that competing alongside with her trainer, Adrienne Lyle, as well as Holzer and Peters is something that has given her the confidence and aspirations to continue aiming for championship level competitions, fine-tuning herself as an athlete, rider and horsewoman.

“I have to say I cannot ask for or wish for better teammates," said Duerrhammer. "I feel like everyone here with me are seasoned competitors and championship athletes and to have them be my first team is a dream come true – it’s amazing,”

In Holzer’s second international championship appearance for the United States after competing most of her career under the Canadian flag, she had to try to keep Valentine focused and calm after struggling with the piaffe at the beginning of the test.

"She's never seen a venue like this and was a little bit nervous, but she settled into it, and to be honest, it totally caught me off guard," said Holzer. "They're horses - they're not machines and she didn't understand what I was asking. I'm obviously disappointed, but also have to be understanding too. When she's brilliant, she's absolutely brilliant. I wish I had a better answer, but I don't. I just have to give her confidence and go back and have her understand that I'm not mad at her, but I think gently, kindly forward is how we have to reapproach. I have to make her, in her mind, comfortable and that's something we can do and work towards again." 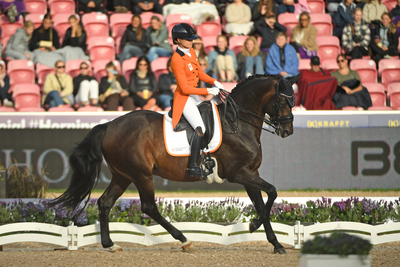 Dinja van Lierre (Photo by Allen MacMillan)Dinja van Liere of the Netherlands on Hermes leads on 78.835, with Benjamin Wernle of Germany on Famoso OLD second on 77.003.

"I was very happy but I had my doubts finishing; was it good enough was it good?"sad van Liere. "But then the audience started clapping, and I felt really happy. Hermes gave me a really good feeling even if I was nervous. He is so talented with piaffe and passage even if we today had a few things that of course can be improved. I really look forward to show again on Monday."

"I am so happy and thankful to ride this horse during this championship," said Werndl. "It has been my dream for so many years and now finally it came true, and it feels amazing, all the tension and suspense just went away. Famoso really tried his best for me, he was a bit tense in the beginning but got more and more relaxed during our ride. I am so proud of him for handling the audience in the end, it is all just fantastic right now, I am glad I could deliver for the team."

"It is a combination of several years of training and building up expectations to this event,"said Kruth. "I feel that a lot of things have come together in the last months. I made a small mistake, my mistake but I cannot be anything but really happy for our ride. It felt that it barely could have been much better.”

"It is completely wild, I cannot really believe what we have done, deliver Zack's highest score ever in international competition,"said Rasmussen. "He is so special, and he is totally amazing. Sure, there was a bit of nerves involved but this what dreams are made of, I am so, so happy."

The stands were virtually empty, with just a few spectators scattered throughout the stands.

The U.S. Dressage Team will return to contest the remainder of the FEI Grand Prix tomorrow, with Steffen Peters of San Diego, Calif., on Suppenkasper going last in the third rotation, according to USEF at 8:14 a.m. ET, but according to the order of go received from the Herning press office, Peters goes at 10:14 a.m.

Adrienne Lyle of Wellington, Fla.), on Salvino, concludes the competition with the final ride at 1:54 p.m. ET.

The second half of the FEI Grand Prix will begin at 5:00 a.m. ET, with team medals being awarded following the conclusion of the competition.