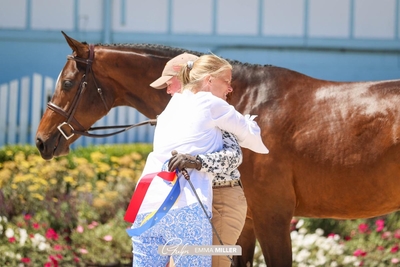 The Leading Handler Award was presented to the handler who accrued the most points, based on ribbons won, throughout the eligible classes during Sunday’s competition.

Howland handled Gina Filewicz’s Thepreacherswife, by Runnintothealter out of My Catori, to the Best Thoroughbred award earlier in the day, and also handled Diana Dodge’s Avon, by Winston out of Revlon R, and Abbie Fischer’s Indescretionable, by Smarty Jones out of I’m Spicy Hot, to top titles.

“THIS IS MY first ever Best Young Horse at Devon," said Hailey Raach. "Normally I don’t get them, my dad Jay Raach does. I had her today and it was great. This is only her second horse show this year. It’s been a lot for her and she’s been really good today.”

“Pangea is by Uno Don Diego, who is a very big dressage stallion," she said. "Her mother is by Console who is another dressage stallion, so she has no hunter in her at all. She’s supposed to be 17+ hands, she’s only two years old, so it makes it special that a two-year-old won today. She’s really easy to work with, the sweetest horse in the barn, she can be a little big for her size, but she’s figuring out how to grow into herself. Hopefully a big hunter career ahead of her.

“I’ve been coming to the Devon Horse Show since I was two years old so it’s been great to come back and see everyone, watch and be able to have great horses to show. It’s been fun.

“My dad is Jay Raach and my mom is Karen Raach," said Hailey. "My dad was the USEF Leading Hunter Breeder Handler of the Year last year. We had the USEF Yearling High Score Hunter Champion Hunter Breeding Horse last year and the USEF High Score Hunter Breeding Horse last year. We show all the time, not just breeding but hunters, jumpers, equitation. I have done hunter breeding here and there, and when we need an extra handler I’ll do it. I don’t do it as often as my parents because they are professionals."

"I’ve been holding since I was 10 years old in amateur handler classes, but I’ve been working with horses and been around horses since I was two years old," she said. "We lived on a farm so I was around horses starting at two weeks old. I am 19 years old and I graduated from high school last year and this is what I do full time. I love it. I would love, in 10 years, to take over the family business and have my parents retire so when I’m 30 I’ll hopefully be in charge of everything and show all of the horses and ponies.”