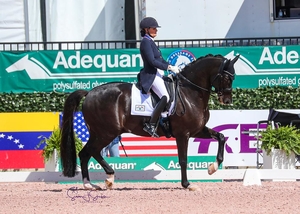 Ashley Holzer on Mango Eastwood (Photo by Susan Stickle)Mango Eastwood is an 11-year-old gelding who began his CDI grand prix career just a month earlier, and has won five of his six starts under the four-time Olympian for Canada, who now rides for the USA.

Holzer scored 72.596 percent, which would have been even higher if not for a big stumble coming from extended trot to passage, which took them a few strides to recover from as Mango found his feet again.

Second went to Jennifer Schrader-Williams with 71.511 percent on Millione, a new personal best score for the pair.

This was also their best finish of the 2020 season, which has been a successful one for the 17-year-old Millione, who began competing at the level in 2018.

Australia’s Kelly Layne finished in third with 69.936 percent on the 11-year-old Samhitas, by Sir Donnerhall.

HOLZER and owner Diane Fellows bought the son of Wynton as a 9-year-old from Spain’s Jordi Domingo and have taken their time training him out of the international spotlight until he was ready.

He now projects confidence in the ring.

“I really haven’t had a ton of experience showing him, and he’s a little tired with this being the third show in a row, but he really gave it,” said Holzer. “There were moments where I was like, ‘Oh my gosh, you’re unbelievable!’ He’s an incredible horse and the mistakes were totally mine; I misjudged the speed in the one-times, but even when I make a mistake he doesn’t throw in the towel or hold it against me, he just comes right back. Once I get all the kinks out, I really think this horse is going to be spectacular.”

Holzer, who is 56 and based in Wellington, said that she models her warm-ups around the world number one, Germany’s Isabell Werth.

“I do my Isabell training before I go in," she said. "I watch my video from the last time and then I watch Isabell’s best grand prix special and she just sits there looking like she’s doing nothing so I try to do that.”

She believes that Mango is right up there with the most talented grand prix horses she has ever ridden.

“I’ve had a lot of luck with a lot of lovely horses," she said. "Pop Art was an amazing partner in the ring, but the breeding has moved on and these breeders are making unreal athletes now. Mango is the next level of breeding as far as athleticism goes.”,

“It’s incredible to be able to come to this facility with top judges and top footing, plus atmosphere and public and encouragement," said Holzer. "You really feel like you’re on home turf here, and I couldn’t be where I am in my career if it hadn’t been for this facility. Without it, dressage in America and Canada wouldn’t be on the map.

“Global has been very conscientious about trying to run a horse show for us but at the same time being careful and cautious about the Coronavirus. So as much as it’s sad to think this is the last Global show for the season — I was almost in tears when I drove here because I love it here so much — I think there’s a bigger global concern right now, and I hope we as a nation and as a world can live up to the challenge ahead.”