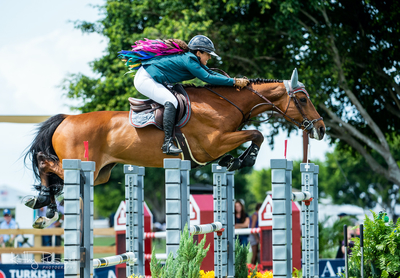 Dani Waldman on Queensland E (Photo by Kathy Russell)Billy Twomey of Ireland, last to go  in the jump-off, actually had the fastest clean round, but a trace of blood was found on his horse following his round, and he was disqualified from the jump-off and placed sixth.

Waldman, who rides with a mass of colored ribbons flying down her back in a most disconcerting way, was raised from second to first.

“Queensland jumped unbelievable,” Waldman said of the 11-year-old Zangersheide stallion that she has had for just over one month. “I actually thought he started a little plain in the warm-up, and then he jumped incredible in the first round. I’d been struggling to sort of put it all together, and I felt like I finally did.”

WADE'S 14 obstacle, first-round track made use of every corner of the Deeridge Farms Grass Arena and asked no shortage of questions from the 40-horse start list. 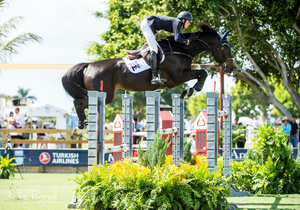 Brian Moggre on MTM Vivre le Reve (Photo by Kathy Russell)Rails fell from start to finish, but the course built in difficulty, beginning with the open water at Jump 7, followed by a large, square oxer at Jump 10b of the triple combination, and finally with a very short four strides from the Jump 12 triple bar to a tall, upright vertical at Jump 13.

“I thought it walked very big today, and normally, I never say that!” said Waldman. “But for me, the distances were in my favor, as my horse doesn’t have the longest stride, so I had options.”

Six riders made the jump-off.

“I don’t know Queensland all that well, so my strategy was to go as fast as I could where I still felt I could leave the jumps up," said Waldman. "It wasn’t lightening-fast, but it was fast enough. Luckily, the horse is so quick naturally.”

Next in the order, Waldman’s clear time of 38.01 seconds was enough to hold-off second and third place finishers, American riders Brian Moggre on MTM Vivre le Reve and Jessica Springsteen on RMF Zecilie, both of whom completed Round Two on four faults.

Last to go, Billy Twomey of Ireland jumped clear and ahead of Waldman’s time but was not compliant with the FEI blood rule, resulting in subsequent disqualification from jump-off competition and a sixth-place finish.

This is the first major victory for Waldman and Queensland E, who officially joined her string in Wellington this winter, following his tenure with Dutch rider Frank Schuttert. I

Waldman says she has her husband, Alan Waldman, to thank for their budding partnership.

“We had been looking for another horse to jump the big classes, and Alan had his eye on this horse for a while," she said. "We didn’t know if it was the best horse we’d ever seen, but Alan was sure it was my horse.”

“He trusted that I could ride him, and I trusted Alan!”