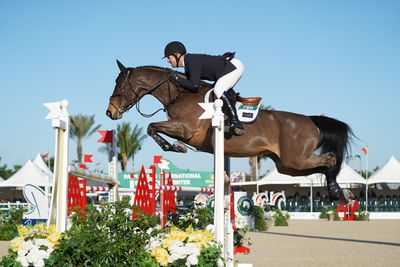 McLain Ward on Catoki (Photo by Sportfot)With a second and a half to spare, Ward and the 10-year-old Holsteiner gelding by Catoki beat a field of 48 over British course designer Kelvin Bywater’s course.

Their time was enough to win over runner-up Ireland's Darragh Kenny on Billy Dorito, who finished in 31.22 seconds.

Ward picked up Wednesday’s win while introducing Catoki, a new mount in his string, to FEI competition in North America.

The horse was previously campaigned in Poland before carrying U.S. rider Brian Feigus to top national-level placings over the past two years.

“I HAVE known the horse and have seen him a few times and always liked him. Seth Vallhonrat brought him to my attention again, and we ended up purchasing,” said Ward, who bought Catoki in November with Marilla van Beuren and Bob Russell. “We have high hopes for him!”

Standing at only 15.1 hands high, according to Ward, Catoki is small but mighty.

“He’s barely a horse," said Ward. "He’s almost a pony, but fast as lightning and very careful. I think he can be like another Carlos.”

Ward’s plan is to get to know the gelding this season.

“We will keep trying to figure him out in Florida and step him up to a few bigger classes," he said. "We will see where we get.”

Of riding a smaller mount, Ward joked, “Mentally, when I get on him, I have to believe he can actually jump the fence. But honestly, he’s a bold horse that doesn’t have a practically short stride. I just have to keep him together, and he’s always right there.”