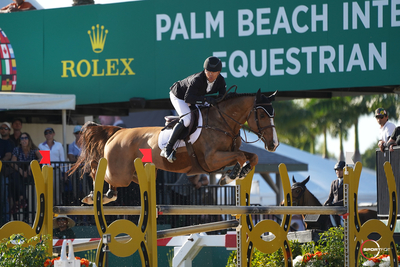 Kent Farrington on Kaprice (Photo by Sportfot)WEF also announced that the Wellington Eventing Showcase will be held at PBIEC’s Equestrian Village venue on Feb. 8 and 9.

The Dressage phase will be competed on Saturday, followed by both the Stadium Jumping phase and the Cross-Country phase on Sunday.

About 30 top Eventing riders representing the USA, Australia, Ireland, and New Zealand are expected to attend this advanced-level competition.

Captain Mark Phillips will once again design the cross-country course, which will be built by Eric Bull, the architect of the acclaimed course at the 2018 FEI World Equestrian Games in Tryon, N. Ca.

The 22-horse jump-off of the Challenge Cup was a who’s who of top sport from a competitive starting field of 103 horses.

FARRINGTON finished the jump-off in 37.44 seconds to beat Abigail McArdle on Victorio 5, who finished in 38.36.

“For this level of competition, I’m producing younger horses, so for me it was more about what the horse is ready to do than how fast the class is going,” said Farrington. “Kaprice is naturally very quick, and she grows in her confidence off riding with a bit of speed because she is extremely careful. She's an incredible horse, and it’s all about keeping her confidence high.”

Farrington got the ride on Kaprice, a 10-year-old Belgian Warmblood mare ,at the end of her 6-year-old year but took his time with her.

“I spent a lot of time not showing," said Farrington. "She had a lot of blood and energy, so I spent almost a year playing with her on the flat and jumping really small fences to get her more manageable. In the last year, she is coming into her own.”

Farrington’s plan is to compete Kaprice in the $73,000 Grand Prix CSI2* on Saturday evening in the mare’s second appearance under the lights.

“My plan is to grow her this season,” said Farrington. “With things like Tokyo coming up, it’s great that we have WEF and this new ground to jump on. I’m confident to show all my horses here, and it’s a great place to produce horses.”

Under 25 rider Taylor St. Jacques held the lead for several trips, but settled for third riding her own Upsilon de la Liniere, in a time of 38.62 seconds, while Brazil’s Rodrigo Pessoa was fourth in 38.82 seconds on Venice Beach.

SCOTT STEWART of Flemington, N.J., rode Everwonder to win the championship in the Green Hunter 3’9” section for the second week in a row. 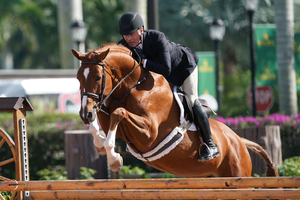 The 8-year-old gelding is in his third season with Stewart.

“We bought him when he was a 5-year-old stallion from Canada, where he was mostly doing dressage,” Stewart said.

In their first few outings, the pair did a few pre-green classes and had a successful season last year showing in the first year green hunters.

While Stewart will continue to show Everwonder, owner Ella Bikoff, of Whitestone, N.Y., is also starting to ride him.

“The idea is to bring him along for Ella to do in the Small Junior Hunters,” said Stewart., who said that after the World Championship Hunter Rider week during week six is finished, the gelding will mainly just show with Bikoff.

After scoring in the 90s in three of their rounds, Stewart was very impressed with Everwonder’s performance.

“He is a really spectacular jumper and jumped well in every round to get a few high scores,” Stewart said.

Stewart was especially pleased to earn champion considering how tough the competition was.

“It’s a very competitive division this year," said Stewart. "Yesterday, I was second with a score of 93.”