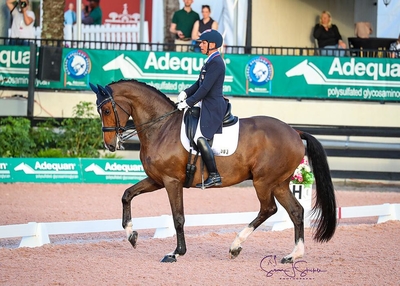 Steffen Peters on SuppenkasperPeters on the huge, 18.2h gelding Suppenkasper had a fault-free performance and scored 76.149 percent, including a high score of 78.404 percent from the Colombian judge at H, Cesar Torrente.

This is the horse’s first visit to the Festival, and he and Peters will remain in Wellington until the CDI5* show in week seven, Feb. 19-23.

“That was really fun," said Californian Peters. "He has endless energy, he’s a dream. If any rider would get on this horse they would say that this is the ultimate feeling.”

Peters attributed his almost 6 percent improvement from the Grand Prix to an altered warm-up routine for the big-framed but light-footed 12-year-old.

“HE'S SUCH A firecracker, like he was in the grand prix," said Peters. "My dream is always to keep the feeling from the warm-up into the ring, and that worked out perfectly today."

“I walked him this morning, and then I worked him for half an hour at lunch time, then I put him away and let him completely settle down, then I did another 20 minutes before the test," said Peters. "That’s what I used to do with Legolas, and maybe this might be the new recipe for ‘Mopsie’."

Peters has the World Cup Dressage Final in Las Vegas in mid-April and the Olympics in Tokyo, Japan in July in his crosshairs.

“Mopsie is sometimes a bit tricky in the arena, and we still have a huge hurdle to go with the freestyle, as it’s quite a different atmosphere, and it's still a bit about desensitizing, but hopefully with one more good freestyle score, we will head to Vegas,” said Peters, who picked up nines for the extended canter, pirouettes and for his riding.

“Since Tryon, where he got extremely excited, he’s been getting better and better," he said. "I’m one of those extremely lucky guys who gets to ride a horse like that, and I think there’s an 80 percent in there; so many times we’ve been close, but I rate him as my big hero, as my best friend. He’s one of those horses that can easily make you shed happy tears.”

Of the 15 starters, Great Britain’s Susan Pape rode Harmony’s Eclectisch to second place with a shade under 70 percent after mistakes in the one-time changes pulled their score down.

The USA’s Anna Marek was third with the charming bay mare Dee Clair on a score of 68.851percent.

In the FEI para classes, Roxanne Trunnell won the Grade I after scoring a career-high of 83.167 percent on Dolton.

Beatrice De Lavalette dominated the Grade II para division after receiving her highest score of the week, scoring 73.667 percent on Duna, while Canadian Jason Surnoski was a close second with 72 percnet on Phoenix.

In the Grade III para division, Rebecca Hart won after scoring an impressive 72.644 percent on Fortune 500.

ADRIENNE STERNLICHT began WEF with a bang by winning a 1.45m class earlier in the week and again winning the $25,000 1.50m Classic on Saturday riding Cadans Z. 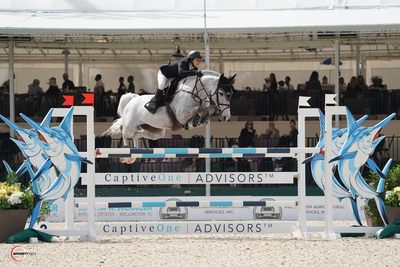 Adrienne Sternlicht on Cadans Z (Photo by Sportfot)From a field of 31, 10 horses advanced to an Eric Hasbrouck-designed jump-off where Sternlicht stopped the clock in an uncatchable 36.769 seconds over her trainer and two-time U.S. Olympic team gold medalist McLain Ward on Heavenly W, who stopped the clock double clear in 38.026 seconds.

“At the end of last year, McLain was riding Cadans Z, and this is my first week back on her," said Sternlicht. "She’s a great mare, has a lot of quality, and today I was able to get out of her way. She has not been the easiest horse for me to figure out. Having the experience of watching McLain ride any horse, especially one that you’ve been working with, is always incredibly educational.”

“I think I won by a little bit of shock factor," said Sterlicht. "Once I got going, I didn’t slow down. Today I don’t think was my prettiest, but my horse was really good to me."

“We come here to compete, so we have a full string of horses going,” said Sternlicht. “For that reason, I think it is great that the new footing feels so fantastic. It is a huge improvement!”

Coming off a team gold medal at the 2018 World Equestrian Games, Sternlicht has hopes for the 2020 Olympic Games in Tokyo, Japan, and is using WEF as preparation for her bid for the U.S. team.

“I think this year has the potential to be the most important year of my riding career,” she said. “I have the best group of horses that I’ve ever had. I’m very, very fortunate to have some depth in my string of grand prix horses. Last year I missed out on several Saturday night classes, so I’m very excited to be able to compete this WEF and to be able to enjoy all that the season has to offer.”