TORONTO, Canada--Brian Moggre, 18 of Flower Mound, Texas, ended his amazing junior career with a third place finish on MTM Vivre Le Reve in the $210,000 World Cup at the Royal Winter Fair on Nov. 9 that catapulted him into the lead in the east coast sub league standings of the North American League with 56 points. 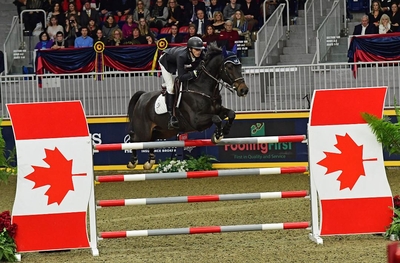 Moggre's third in Toronto followed his win in the World Cup class at The National a week earlier, his second World Cup victory.

At just 18, Moggre is winning over many of the top riders in the world rankings such as Ben Maher, currently standing fourth in world rankings, Beezie Madden, seventh, McLain Ward, 10th, and Kent Farrington, 11th.

Ireland’s Bertram Allen won the World Cup over second placed Belgium’s Jos Verlooy in Toronto on Saturday night in front of a sold out house to close out the Royal Horse Show, held as part of the 97th Royal Agricultural Winter Fair.

"THIS YEAR has been completely surreal," said Moggre, who trains with Mike McCormack at MTM Farm in Dallas, Texas. "At the beginning of the year, I certainly didn't expect to do so well. I'm over the moon."

Brian Moggre (Photo by Kim MacMillan)"Toronto was my last show for this year," said Moggre. "We're off to Wellington now. The horses will have some well deserved time off and then get back up in January."

Moggre is looking forward to competing in the World Cup which will be held April 15-19 in the Thomas & Mack Center in Las Vegas, Nev., and is hopeful of making an international team in the future.

"I talked to Robert Ridland during one of the Young Riders competitions," said Moggre, referring to the chef d'equipe of the U.S. teams. "I'm hoping to spend more time with him. I would love to make a team. That would be a wonderful goal to achieve."

Canadian course designer and Olympic individual silver medalist Michel Vaillancourt set a course in Toronto that challenged some of the world’s best show jumping athletes and their horses in the sold-out Coca-Cola Coliseum, which was packed to maximum capacity with a crowd of 6,631 in attendance.

Only four riders jumped clean to advance to the jump-off, and the times became faster and faster until the final challenger, Allen, 24, brought the crowd to its feet with a thrilling jump-off performance riding GK Casper in a time of 34.70 seconds to overtake Verlooy, 23, who had stopped the clock in 35.41 seconds on Igor. 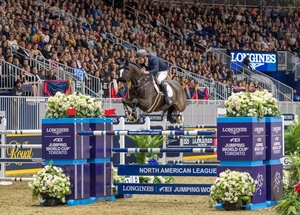 Bertram Allen on GK Casper “This is a super show,” said Allen, who was making his Royal Horse Show debut. “I didn’t have my best week until tonight, but it all came together. It’s one of the biggest classes that GK Casper has jumped and his first World Cup. It was hard, but I knew if I got the first round behind me, I didn’t have to worry about the jumps as much in the second round. I could really give it a lash."

“He’s always been a fantastic jumper, but it has taken him longer to get to this height,” said Allen of his 11-year-old Holsteiner stallion. “Most horses start their first season off doing this at about 9, but this is his first season now.”

Allen, who finished third in the World Cup Final when it was last held in Las Vegas in 2015, now has his sights set on a return trip.

“The atmosphere is incredible at this show, and that gives you extra motivation to do well,” said Verlooy, who won team gold and individual bronze medals at the 2019 European Championships earlier this year with Igor. “At the beginning of the year, I called Bertram, and I said, ‘Let’s do a tour in America.’ I actually regret it now!” 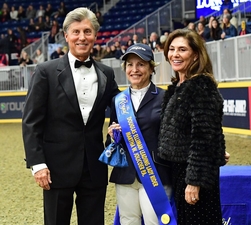 Margie Engle, Leading Lady RiderJoking aside, Jos continued, “My horse is a great horse, and I was really looking forward to today. I am very happy with my second place.”

Moggre was the first rider to jump clear in the opening round and again set the standard by jumping clear in the jump-off riding MTM Vivre le Reve, finishing in a time of 35.83 seconds that placed him third.

“Toronto is a spectacular city and this horse show is incredible,” said Moggre. “When I got the first email saying that I was on the wait list, I was hoping every day that I was going to get in. This is a wonderful show that I would love to be invited back to. My horses seem to like it as well. It is my last show of 2019 and last show of my junior career. It was very special to do that here, and it meant a lot to me and to everybody on my team to be invited here.”

As the only other jump-off challenger, 2012 Olympic team gold medalist Maher, 34, rode Tic Tac to fourth place with a clear round in a time of 36.32 seconds.

Rowan Willis, 39, of Australia on Blue Movie had the fasted four-fault trip in the opening round to place fifth over Canadian Eric Lamaze, 51, on Cgacco Kid.

Margie Goldstein-Engle on Dicas 4 was seventh and Kent Farrington on Austria 2 was eighth.

The Royal Horse Show has been selected as the only Canadian venue to hold a World Cup North American League qualifier for the next three years.

Lamaze was both the Leading International Rider and the Leading Canadian Rider, and U.S. Olympian Margie Goldstein-Engle was the Leading Lady Rider.