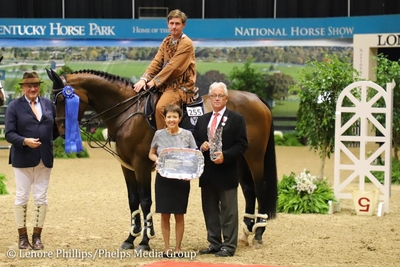 Lillian Cushny, escorted by Joseph Pugliese, presenting the Cavcote Trophy to Darragh Kenny (Photo by Elaine Wessel)In celebration of the Halloween season, riders competed in costumes ranging from the Flintstones to Toy Story characters, jockeys in silks, Pirates of the Caribbean, skeletons and the Joker, among many other inventive outfits.

In the one round speed class over Ken Krome’s 13 effort track, Katie Dinan on Brego R’N B wasted no time as, the second in the ring, she was the first to go clean, finishing in 72.46 seconds, but that time was quickly eclipsed by Shane Sweetnam..

Then Daniel Coyle of Ireland on CHS Krooze, 15th to go, finished almost 10 full seconds faster in 53.80 seconds, but his time didn't hold for long, as fellow Irishman Kenny finished in the slightly faster time of 53.74 seconds, capturing the lead by mere milliseconds as the 16th duo in the order.

MORE THAN 40 subsequent contenders, riding in costumes such as jockeys, a judge, Mario and Luigi, multiple generations of Madonna and more, tried to beat Kenny's time but weren't successful.

Coyle, dressed as a skeleton, stayed second, and Andy Kocher on Fashion V, finishing in 54.070 seconds as Freddie Mercury and his golden steed, placed third. 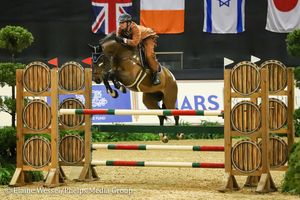 Darragh Kenny on Billy Dorito"Billy Dorito  is a 9-year-old horse that belongs to Teddy Vlock," said Kenny, who rode as an indian. "He's a very nice horse that is still just getting to know this level and these shows, but I think he is going to be a very good horse. He did Washington last week and has been good here this week, so he is settling in quite well. Next year he will start to jump more grand prix classes. This year we are just trying to help him gain some experience and get to know these types of rings, and then next year he will step up to a higher level. ”

“I had a plan to go as quick as I could and do the plan that I wanted to do and it paid off,” said Kenny. “It's a lovely horse show with a super ring to ride in. It is also a very well done horse show and it’s nice to be here.”

“I think once you are in the ring, you don’t notice that you are wearing a costume," said Kenny. "I try to always wear something that is not too crazy, but I don’t seem to notice when I am in the ring.” 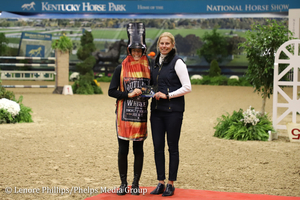 Friday's afternoon class is the $36,000 Accumulator Class, and the weekend’s feature events will be the $25,000 Amateur Owner/Junior Jumper Grand Prix and $225,000 Jumping World Cup CSI4*-W, the highlight of the show.

The Maclay National Championship is Sunday.