Chapot of Neshanic Station, N.J., jumped out to a quick start in the jumper division 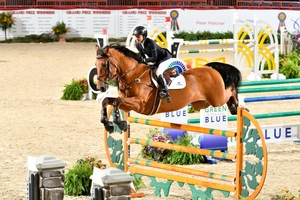 Laura Chapot on Chandon Blue (Photo by Al Cook Photography)Chapot has been leading open jumper rider in Harrisburg before, and would love to take that title again.

Riding Calafornia, Chapot was the early pace setter with a time of 56,58 in the 10,000 1.40m Speed Challenge, a single-round class with an 11-fence course designed by Michel Vaillancourt.

Bur Marilyn Little, going last in the class on Karen O'Connor's Clearwater, had the advantage of knowing what she had to do and which turns were working, and she came home in 54.15 to win over the 33 horse field.

LITTLE'S SHARP inside turns and steady pace earned her a faultless time of 54.15 seconds,in the first class of the jumper division in Harrisburg. 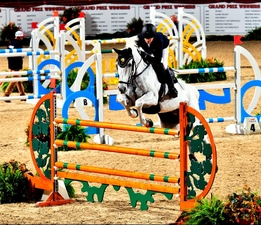 Marilyn Little on Clearwater (Photo by Al Cook Photography)"I came thinking I was going to jump four or five jumps out there and find our feet, but as I was watching the class I saw those two inside turns, and I know what Clearwater can do on the landing of the jump and it doesn't usually affect his next jump," Little said, noting that the pair have not shown since June. "It was a great opportunity for him, so we just changed our plan and said 'Okay, we'll utilize this' instead of going back in the 1.45m tonight.

"On the one hand, I thought maybe we needed to have a slow round, but sometimes when you're rusty, the best you can do is practice what you know," Little said. "He likes to carry a good lick, and I'm not sure a slow class was really going to prep us for the rest of the week."

Returning to the ring in the $15,000 1.45m Dash for the Cash, Chapot had a speedy trip of 51.88 seconds around another Vaillancourt-designed courseto beat second-place Sydney Shulman and Azilis Du Mesnil by just three-hundredths of a second.

"Chandon Blue is a naturally fast horse," Chapot said. "He was very excited to be here today. He was prancing and dancing in the schooling area, and I think he was just on fire. Fortunately, he has a really quick way of going and his natural speed is just a bit above what a lot of other horses can do."

Chapot is familiar with her mount's natural speed after riding him for more than a year, and her plan for Wednesday's class was a smooth round.

"He's a great horse for me," she said. "He suits my style really well. He's got a lot of energy, and he really wants to go and try hard." 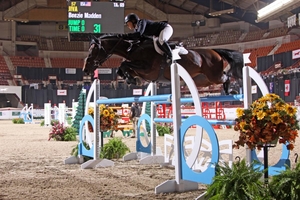 Beezie Madden on Jiva (Photo by Al Cook Photography)Riding first of 20 in the order, Victoria Birdsall had a speedy clear round of 54.39 seconds on Djumpsina SFN, but her time was quickly surpassed by Madden, riding fourth in the order, whose blistering time of 50.79 seconds proved uncatchable as the class continued.

"I went early, so I planned to just be a little on the attack," Madden said. "It was quite fast in the beginning and settled down a little at the end. I think there were a couple places someone could have nipped me doing one less stride somewhere, but Jiva has a lot of natural foot speed so it carried over."

"She's just a very good horse to have to try to win some speed classes," Madden said of the 10-year-old Belgian Warmblood mare. "She can do a little bit bigger than this as well, but she's a great horse to have. It's good to have a horse you can go fast with and have the confidence she'll leave all the fences up." 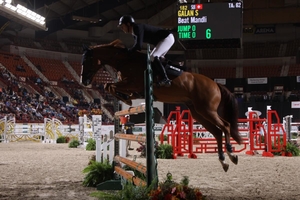 Beat Mändli on Galan S (Photo by Al Cook Photography)Course designer Michel Vaillancourt set a challenging track that had just five of 24 starters go clean, and Mändli won with the only clear round in the jump-off.

"I think Galan S is the sweetest horse I've ever ridden," Mändli said of the 13-year-old Belgian Warmblood. "He's so nice. Honestly, he's like a kid. He really wants to please. He doesn't try to do anything wrong. He always tries his best, and I think that's the best part apart from his ability to clear the jumps and do what we ask."

Madden was first for the jump-off on Abigail Wexner's Coach, but she had a rail on the fourth fence, and the next two competitors misjudged the turn to the second obstacle.

Mändli posted the first clear round, setting the pace at 37.59 seconds with one rider remaining.

"I went near the end so that was an advantage for me," said Mändli. "The other ones made some mistakes here and there so I could slow down a bit. Galan S is jumping in Saturday's grand prix, and he has another two weeks ahead of him. He's going to Washington, and we're practicing a little bit for that. We're trying to move him up this year."

Marilyn Little and Karen O'Connor's Clearwater were the final pair to jump off, but despite a rail at the first element of the double combination, she had the fastest time of 34.32 seconds to place second.

"My horse sprouted wings and somehow managed to jump out of the combination," Little said of the 12-year-old Holsteiner. "I thought I'd just go a touch wider in the turn to the double, and I just lost the rhythm for a second and the distance got away from me and got really long. He reached for it and made it work. What a good boy. I think the world of him. He tries to win on the best nights, and he will save you on the worst."