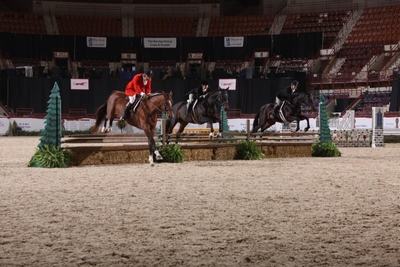 Members from eight registered Hunts from all across Pennsylvania, Maryland, and Virginia competed Monday night.

As no Hunt Night is complete without foxhounds, the members and hounds of the Kimberton Hunt of Chester Springs, Pa., entertained the crowd with a demonstration of how foxhounds work together as a pack.

THE HUNT TEAMS competition had 13 teams in a class where three riders from the hunt follow each other over a course of obstacles and then jump in unison over the last fence.

Winning to claim the Potomac Hunt Challenge Trophy was Elkridge Harford Hunt Team 1, made up of Ashton Williams' Champagne Chic and Peace Party, along with Lambert Boyce's Respectful Ed.

Taking the blue ribbon and the Max C. Hempt Perpetual Trophy in the Field Hunters, Riders 35 & Under class, was Samantha Schiff aboard Try It Again of the Bull Run Hunt.

Coming in first for the Field Hunters, Riders 36 & Over class, and winning the Chairmans Perpetual Trophy, was Billy Frederik and Chasin Charlie, also of Bull Run. 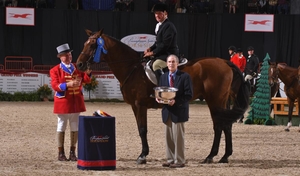 John Wilkowski (Photo by Al Cook)In the Gentleman's Hunter Under Saddle, John Wilkowski and Westwood of Mr. Stewart's Cheshire Foxhounds came out on top to earn the blue and the Rose Tree Perpetual Trophy. 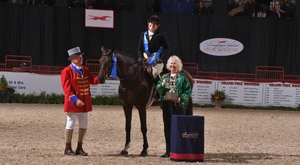 Hunt Night culminated with the awarding of the Ralph A. Alfano Memorial Perpetual Trophy, which is given to the hunt that acquired the most points throughout the night.

This year, the trophy was presented to Bull Run Hunt, earning ribbons in every class for a total of 32 points.