BARCELONA, Spain--The U.S. Jumping Team was in a three-way tie for third place with Brazil and Great Britain in the Nations Cup Final Challenge Cup on Oct. 4, finishing on a team score of 12 under the lights at Real Club de Polo de Barcelona in front of an enthusiastic, dressy crowd  that was thrilled with its hometown Spanish team's win. 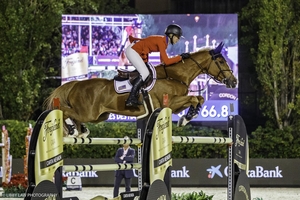 Spain won with 4 faults,  The Netherlands was second place on 8, while Brazil, Great Britain and USA tied for third place when all three had 12 faults.

It was a disappointing result for the U.S.

Ridland has been very successful over the past few years in coupling young, up-and-coming riders with veterans, but this time, with not only young riders but with veterans paired with younger, untested horses, it just didn't work  out.

In fact, it was the youngest rider who had two clear rounds, one Thursday and one Saturday evening, the only double clear rounds the U.S. team posted.

THE COMPETITION order was determined by each team’s placing in Thursday’s qualifier class and ran in reverse standing, with the U.S. set at sixth in the rotation.

Reid of Wellington, Fla., and Luis P, a 10-year-old Deutches Sportpferd gelding, led off for the evening and had eight faults.

Jobs of Los Altos Hills, Calif., on Venue D’Fees Des Hazalles, a 14-year-old Belgian Warmblood mare, continued the pair's strong string of performances, securing the only fault-free effort for the team in a near flawless round.

“This was the perfect ending to a great year so far," said Jobs. "I couldn’t have asked for more from Venue, especially at Nations Cup Final. We’ve really had an extraordinary year, and I owe it all to her and to my team. I only did my first senior Nations Cup competition this year, and we’ve really grown from there. We jumped a lot throughout the summer, culminating with the Pan American Games and here. It has really given me confidence, and every time I go into the ring she’s right there with me.”

Kraut of Royal Palm Beach, Fla., and Fleurette, a 10-year-old Selle Francais mare, had four faults, while Spooner of Agua Dulce, Calif., and Quirado RC, a 10-year-old Hanoverian gelding, rode as the anchor pair for the team and finished on eight faults.

“Eve had a really solid week," said Ridland. "Tonight was a great round, and it’s been a really great year for her with the Pan American Games. She performed tonight here under pressure, and that’s what you look for when you bring young talent to these kind of events. Chloe and Richard were called up late, and it went well. We came close tonight, down to the last rider, and all of the horses improved throughout the week. We had some young riders, younger horses and under the lights was a nice test for them too, so overall it was a positive night.”

The decision was made to substitute McLain Ward of Brewster, N.Y., and HH Azur, after a minor injury prevented them from jumping in the evening’s competition.