LEXINGTON, Ky.--Scott Stewart of  Flemington, N.J., finished first and second on Betsee Parker's Mayflower and Standstone, respectively, in the first round of the 3'/3'3" Green Hunter Incentive Championship at the Kentucky Horse Park in Lexington on Aug. 13. 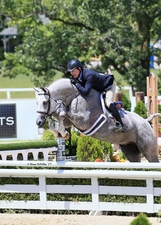 "I always look forward to coming here," said Stewart. "It’s really nice going in this ring, but the horses aren’t used to it so it’s a little bit of a hard day the first day. I think each day will get a little bit easier."

"I think the Championships are great to highlight the young horses for the owners and riders," said Stewart, who was champion in 2014, 2016 and 2017.

Stewart is also the leading Tier I rider for the USHJA Green Hunter Incentive Program.

TYING FOR second place with an overall score of 264 and each winning $5,634.30 were Stewart on Sandstone, a 6-year-old Palomino KWPN gelding, and Chris Payne on Gratitude, a bay warmblood gelding. 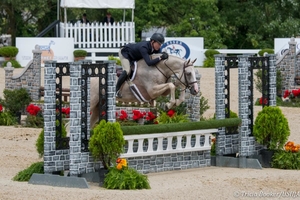 Scott Stewart on Sandstone (Photo by Tricia Booker)Stewart and Sandstone, owned by Betsee Parker, tied for second place in the First Round of the 3'/3'3" Platinum Performance/USHJA Green Hunter Incentive Championship. Photo: Tricia Booker/USHJA

The 3'/3'3" Championship features three rounds of competition over three days.

The top 30 horses, including those tied for 30th, with the highest cumulative scores from Rounds 1 and 2 will advance to the final Championship Round on Aug. 15, where they will start with a clean slate and compete for $80,634.