LIMA, Peru-- All four members of the U.S. Jumping Team turned in impressive performances on Tuesday, Aug. 6, during the opening day of jumping competition at the Pan American Games in Lima, Peru. 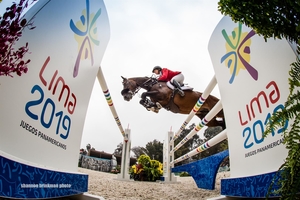 Beezie Madden on Breitling LS  (Photo by Shannon Brinkman Photography)The team of Lucy Deslauriers, Alex Granato, Eve Jobs, and Beezie Madden, led by Chef d’Equipe Robert Ridland, were all clear and quick to give the U.S. an early lead.

Tuesday’s round was a faults-converted speed format and established the starting order for the Team Competition.

In addition, the results from Tuesday’s round will be combined with Wednesday’s Round 2 and Round 3 for the final team score and to determine team medals.

Her clear round in 68.82 seconds went to the top of the leaderboard, and she will continue with zero penalties.

“I ACTUALLY give due credit to all of my teammates, because our plan was to make a strategy after they went,” said Madden, who went last of the U.S. riders as the anchor rider. “They all went so well that we were going to either be really close to the lead or just out of the lead. The strategy between Robert Ridland, [my husband] John, and myself was just to try and go and beat Alex at that point, so that we had a little more leverage in the lead. If it didn’t work, then we were still in a great position for tomorrow.”

“My horse was fantastic,” said Madden of her winning 2018 FEI Jumping World Cup Final partner. “I felt confident that I didn’t need to nurse him around today because he’s already done this format and done it well.”

The first to represent the U.S. was Granato of Wellington, Fla., on  Carlchen W who finished the course clear in 70.66 seconds.

With the multiplier used for individual standings, Granato is now in third place with 0.92 penalties.

“Being the first in for our team, I really wanted to carry a strong pace but focus more on a good result,” Granato said. “My horse felt fantastic. Even in the warm-up and all week, he’s felt good and relaxed and really ready. I wanted to have him carry his natural quick pace and focus on the results.”

Jobs of Los Altos Hills, Calif., rode her own Venue d’Fees des Hazalles to another clear round in 71.16 seconds, and she is sixth with 1.17 penalties.

“She was amazing,” said Jobs of her horse that she has been riding for two years. “I had a little bit of nerves going into the first day. I think I just wanted to perform well for my team and for myself. I couldn’t be happier with my round. She’s really phenomenal to ride. She is there for me when I need her. She gives me a lot of confidence, and I’m really proud of the partnership I have with her.”

Deslauriers of New York, N.Y., on Hester added another clear round for the team in 71.45 seconds to stand eighth with 1.32.

“I really wanted to use my horse’s stride to my advantage,” said Deslauriers. “I know the first day, I really had to get on my pace at fence one and stick to my plan. It pretty much went that way, so I’m really happy. Luckily, I’ve had some practice with him in those situation,s and he’s so game. If there weren’t distances that I was planning, or things came up a little bit differently, I knew I could keep kicking and he would be right there, and he absolutely was. I’m very happy.”

In team competition, the U.S. Jumping Team leads with 2.09 penalties, Brazil is second with 3.39 penalties, and Canada is third with 6.21 penalties.

The U.S. Jumping Team returns Wednesday, Aug. 7, for the second round, which counts toward individual and team standings, at 11 a.m. EST.

Team medals will be determined after the top 10 teams return for a third round at 3 p.m. EST on Wednesday.