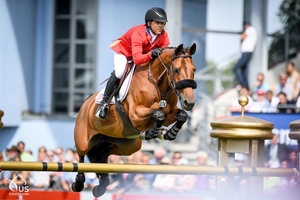 Kent Farrington on Gazelle Farrington of Wellington, Fla., and the 13-year-old Belgian Warmblood mare owned by Robin Parsky and Farrington, jumped triple clear to win the first leg of the 2019 Rolex Grand Prix of Show Jumping.

It was a very special victory for Farrington that he had very worked hard for.

Daniel Deußer was the last to go in the jump-off with Tobago Z and had the chance to steal away Farrington’s triumph, and Tobago gave his very best, but ultimately Gazelle did her name justice.

Tobago flew over the last oxer and crossed the finish line in 44:35 seconds, but the clock had stopped at 43.98 seconds for Farrington and Gazelle, which meant second place for Deußer and the victory for Farrington, accompanied by 330,000 of the prize-money – one million Euros in total – and the chance to win much more, because he is now the current contender for the Rolex Grand Slam of Show Jumping!

Farrington had one thing in mind when he entered the ring for the jump-off: Not to come second again!

That had been the case in 2014, when he was indeed the fastest with Voyeur, but he had a rai downl.

“I wanted to have my name eternalised on the winners’ board”," said Farrington.

So, his tactic was to ride fast but not take too many risks.

“I didn’t want to have the fastest four fault ride again,"  he said. "It is such an impressive list of fantastic riders who have won the Grand Prix of Aachen. I am so proud to now be one of them!”

Especially since Farrington has had an extremely hard time since 2018.

But, while he was training a horse at the Winter Equestrian Festival in Wellington, he had an accident.

He suffered a compound break of his lower leg, which had to be operated on and meant he was out of action for months.

“It was really bad and a real test of how much I really wanted to do all of this here," said Farrington. “Gazelle, has helped me fight my way back to the top again.”

IT WAS A hotly contested race for a podium finish at the Dressage Nations Cup at the World Equestrian Festival CHIO Aachen on Saturday, July 20, butin the end the U.S. Dressage Team earned the bronze medal under the leadership of Chef d’Equipe Debbie McDonald. 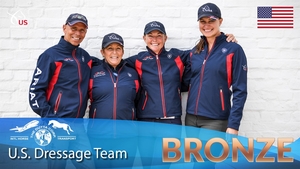 Host country Germany won the title in the seven-nation competition with a final score of 489.477, with Denmark earning the silver on a team result of 457.515.

“I am very pleased with our team result,” said McDonald. “It was great sport today and our athletes and horses rose to the occasion. We look forward to the CHIO Aachen – it’s always one of the highlights of the competition year.”

Riding as anchor for the U.S. on the final day of team competition, Adrienne Lyle of Wellington, Fla., on Salvino posted a 76.870 percent in the Grand Prix CDIO5*, placing eighth.

Saturday’s Grand Prix Special proved to be another successful and consistent ride for them, cementing the team's third place finish with a final score of 76.745 percent.

Teammate Steffen Peters of San Diego, Calif., on Suppenkasper was right on the heels of Lyle in the Grand Prix, earning a final score of 75.848 percent and followed with a 74.872 percent in the Grand Prix Special.

Lyle started her week in Aachen riding in the CDI4* with U.S. bred Harmony's Duval to score a personal best of 75.391, placing sixth, and in Friday’s CDI4* Grand Prix Specia she scored 74.234, placing fourth.

“I am beyond thrilled with the performance from Harmony’s Duval," said Lyle. "Duval has been in my life since before he was saddle broke, and it’s been an amazing and rewarding journey with him. I can’t thank Debbie McDonald enough for all her wonderful coaching and guidance she has given Duval and I over the years. I am very excited for his future!”