BALTIMORE, Md.--Global Freedom, owned by Geroge Mahoney's Rosbrian Farm, shipped in from Ireland to secure a victory in Far Hills’ Gladstone Stakes for leading Irish trainer Gordon Elliott and was honored as the 3-year-old champion steeplechaser on Jan. 16. 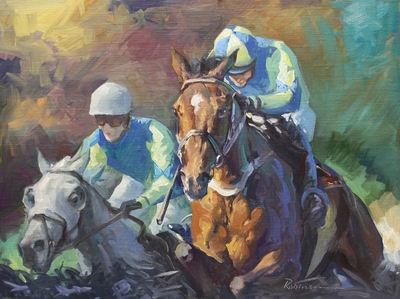 "Global Freedom  is on vacation now," said Mahoney. "He's at Ricky Hendrik's farm, and he'll be trained by Ricky next year. He'll start back up in the spring."

"Ricky spent a week in Ireland at Gordon Elliott's farm a couple of weeks ago." said Mahoney. "Gordon has over 200 horses in training. He won four races at one meet the first day Ricky arrived."

"Ricky was back from Ireland and sat at my table. Tom Kelso and his wife were also at my table. Tom is the chairman of the Maryland Stadium Authority, and he was instrumental in the Fair Hill project. He oversaw the whole project of redoing the track. The track is all sodded, so it will be ready for races this year. And the 3-day event is now a 5* event and  will be held there. Fair Hill was a project that Jay Griswold and I were very involved with.

"It was a very nice evening. It was really well attended, and everybody had a really good time. There was music after the awards. It was a wonderful evening.

There was a portion of a fence there, I think it's called an Easy Fence, that everybody could look at and touch." said Mahoney. "They're just looking at another fence. It would replace the fence we use now. No decision has been made, but his fence emulates what is sometimes used in Ireland and England."

Racing commentator Michael Finney served as the master of ceremonies for the sold-out awards program, music was provided by Release, and NSA official artist Sam Robinson displayed several of his works.

His painting of Scorpiancer and Moscato graced the front of the awards-dinner program.

THE TIMBER Champion was Ballybristol Farm’s Andi’amu, trained by Leslie Young, who won three timber stakes, including the Virginia Gold Cup, to lock up the title in a competitive division. 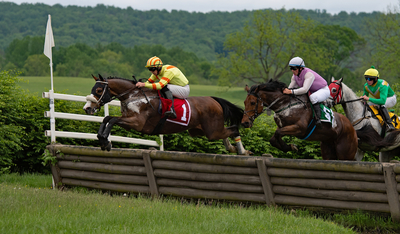 Andiamu leads Doc Cebu over the water jump in the Gold Cup (Photo by Tod Marks)"Paddy and I went to the awards dinner," said Leslie Young. "It was a nice evening. Andi'amu's owners, Tom and Roxy Collins, who live in Chicago, came all that way for the dinner, and they enjoyed it. Mr. Collins is now on the board of directors."

"We had done the same thing the year before, when he won both steeplethon races. It's a good plan for him, go in a flat prep race, and then he likes both those courses.

"It was great that Paddy was able to go to the dinner," said Young. "Paddy's good.  Physically he's well. But mentally, he struggles with anxiety and crowds. He gets a little better every day."

Paddy, five-times the champion steeplechase jockey, suffered major injuries in a fall at Radnor Races in 2017 and has been recuperating since.

Paddy suffered head trauma after being kicked by a trailing horse when his mount, King’s Apollo, fell in the $30,000 Radnor Hunt Cup, a timber stakes race.

MICHAEL BUCKLEY'S Brain Power, the year’s leading earner in competition over fences, was honored with the
Lonesome Glory Award.

For the second time in three years, Bruton Street-US led all NSA owners to win the Leading Owner title.

The Leading Trainer went to Jack Fisher, who dominated the season from beginning to end, won a personal-best 37 races and established an earnings record of nearly $1.6-million.

The Leading Jockey title was shared by Jack Doyle and Michael Mitchell, who ended the season in a tie with 20 wins apiece after Doyle sustained an injury at the Steeplechase at Callaway Gardens and, in a gesture of superb good sportsmanship, Mitchell declined to take a shot at winning the title outright at the Steeplechase of Charleston.

The Leading Apprentice Jockey was Brian Linehan, an Irish point-to-point jockey who rode the fall season and took the apprentice title with five wins in 14 mounts.

The Woodville Award, which is awarded to one of steeplechase racing’s unsung heroes, was presented to Julio Herrera Jiminez, who was sponsored by Madison Meyers and Kieran Norris.