Jack FisherLe Chevalier, trained by Julie Gomena, is the slight favorite in the race over Two's Company, but Fisher also has Lemony Bay entered in the Stakes, and his horses can never be discounted.

Post time for the first race, the $30,000 Milfern Cup hurdle for maidens, is 1:30, and Fisher has two entered, Prayer Hope and Gostisbehere, and Jonathan Sheppard, currently second in the Trainer standings, has Hepcat entered.

The fourth is the featured hurdle race, the $35,000 National Hunt Cup Allowance, and Fisher will saddle Other Cheek to run against six other starters.

ALWAYSMINING has won six straight races, including five stakes, at Laurel Park in his home state of Maryland. 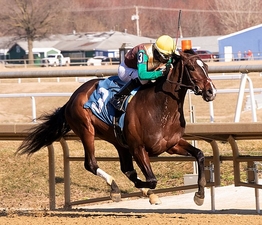 Alwaysmining winning the Private Terms If he keeps his win streak going in the Preakness Stakes on Saturday, he will become the ninth Maryland-bred and the first in more than three decades to win his state’s signature race.

Alwaysmining, by Stay Thirsty, was bred by Avla Pitts and was a $32,000 purchase as a yearling by 3-D Bloodstock at Keeneland in 2017,, then was a $130,000 pinhook later that year at the Keeneland September yearling sale, selling to Jim McIngvale.

He was a private purchase by Runnymede Racing after his maiden victory last June at Laurel (see The Horse's story of April 23), and Runnymeade is managed by Joe Cassidy of Unionville, Pa.

Alwaysmining won the Maryland Juvenile Futurity, Heft Stakes, Miracle Wood Stakes, and Private Terms Stakes by a combined total of 36 1/2 lengths before earning an automatic berth in the Preakness with an 11 1/2-length victory in the Federico Tesio Stakes on April 20.

SHEPPARD and Graham Motion have recent winners, as does Union Rags.

Lady Munnings, a 3-year-old homebred of Mr. & Mrs. Rodman Moorheard III of West Grove, Pa., and owned by their Buttonwood Farm, won a $30,000 Pa.-bred Maiden race at Presque isle on May 16.

Trained by Sheppard and ridden by Mario Pina, Lady Munnings tracked the pace, waited through the turn for racing room and closed well to win the 5 1/2 furlong race by 2 3/4 lengths.

Motion saddled Two Legends Farm's homebred and Maryland-bred Benandjoe to win a $33,318 Maiden Claiming race at Pimlico on May 16.

Ridden by Trevor McCarthy, Benandjoe ran in the five path in upper stretch and won by 3/4 length in the 1 mile turf race.

This followed her wins in the G1 Beholder Mile on March 30 and in the G2 Santa Monica on Feb. 16, both at Santa Anita.

Saguaro Row won a $85,000 Allowance race at Belmont on May 12 after swinging four wide in the stretch and closing to win the 1 3/4 lengths in the 6 furlong race.