NORTHBROOK, Pa.--Armata Stables' Grand Manon, with two legs on the Henry C. Baldwin Challenge Trophy, will be going for the win in the Open Timber that would retire the trophy at the Brandywine Hills Point-to-Point in  the Myrick Conservancy on Sunday, April 7. 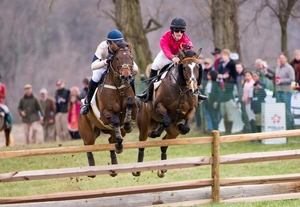 ALONG WITH great racing is a raffle with outstanding prizes which are announced between races all afternoon, a parade of the Radnor Hounds and food available for purchase.

Racing begins at noon with the Junior Field Masters Chase with sections for small, medium and large ponies and horses.That's followed at 12:30 by Small, Medium and Large Pony races, with Lead Line Pony race scheduled for 1:15.

The first Timber race, begins at 1:45, and Davies has Maryland Hunt cup veteran Derwin's Prospector entered in that.

The Heavyweight race is scheduled for 2:15, followed by the Novice Timber at 2:45 and the Open Timber at 3:15, with the Foxhunter Timber the final race at 3:45.

With beautiful weather predicted and temperaturs in the high 60's, Brandywine Hills Point-to-Point is the perfect place to spend a glorious spring day while enjoying some thrilling racing and benefiting the Brandywine Red Clay Alliance.

Visit www.brandywineredclay.org for more information or call 610-793- 1090 to reserve parking.