Jack Fisher moves into lead in Trainer, Money Won and is tied with Ricky Hendriks in Trainer, Races Won

With two wins at the Foxfield Fall Races in Charlottesville, Va., on Oct. 7, and one win at the Geneseo Valley Hunt Races in Geneseo on Oct. 14, Jack Fisher moved into a tie with Ricky Hendriks in Trainer, Races Won, with 15 wins apiece, and he moved into the lead in Trainer, Money Won, with a mere $3,000 lead over Hendriks.

Jonathan Sheppard remains in third in both categories. 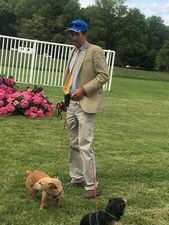 Fout won two races for Beverly Steinman, the $15,000 Maiden Claiming with Shamsaan, ridden by Foley, and the Training Flat with Deposit, also ridden by Foley.

KATHY NEILSON trained two winners on Oct. 13, one at Middleburg with Nancy Reed's Handsome Hoyt, ridden by Gerard Galligan, in the $15,000 Maiden Timber, and one at Geneseo with Irvin Naylor's Ardrahan (GB), ridden by Eddie Keating, in the Maiden timber.

Galligan not only rode a winner but also trained the winner in the $20,000 Filly and Mare Maiden Hurdle, his own Mavourneen, ridden by Beverly Baumgardner.

In the $40,000 Timber Stakes at Middleburg, Le Chevalier, owned by Michael Smith, trained by Julie Gomena and ridden by Jack Doyle, won by 4 1/2 lengths.