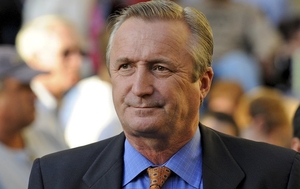 Rick VioletteViolette was born Jan. 30, 1953 in Worchester, Mass., and showed hunters and jumpers as a teenager.

After his graduation from Lowell University, Violette turned his attention to the racetrack and, at age 24, began training thoroughbreds full-time.

He saddled his first starter on June 25, 1977 at Suffolk Downs in East Boston, Mass., and his first win came less than two months later with Catch the Action on Aug. 18 at Rockingham, N.H.

Following his training start, Violette worked as an assistant to Emile Allain at Woodbine Racetrack in Ontario, Canada, before moving to New York as David Whiteley's assistant trainer. He resumed his own stable in 1983.

MOST RECENTLY, Violette campaigned Lauren and Ralph M. Evans' New York-bred Diversify to victory in the 2017 G1 Jockey Club Gold Cup, as well as the G2 Suburban and G1 Whitney this summer.

Through three seasons of racing, Diversify has garnered nearly $2 million in earnings with 10 wins from 16 starts.

Additional G1 winners for Violette include Kentucky-bred Dream Rush and the Florida-bred Man From Wicklow, who Violette also owned.

But Violette was much more than a trainer.

His accomplishments are wide ranging and remarkable: health insurance for backstretch workers, workers’ compensation for jockeys, a proper split of the Aqueduct video lottery terminal revenues for purses, significant contributions to the Backstretch Employee Services Team, contributions to backstretch recreation, a founding board member of the Thoroughbred Aftercare Alliance, and founder of the TAKE2 Second Thoroughbred Program and the Take The Lead Thoroughbred Retirement Program. The list goes on and on.

"He was a great horseman, very straight forward and honest," said Chairman and President of the Thoroughbred Retirement Foundation, who also had Take the Bluff and a couple of other horses that Violette trained. "He worked so hard for the backside. He started Thoroughbred Aftercare and another program to retrain race horses for other jobs. He was absolutely committed to animals and his employees and the welfare and education of people on the backside. He was extremely committed to everything he did."

“Today is a sad day for horsemen, backstretch workers and horse racing in general,” said NYTHA President Joe Appelbaum. “We have lost a leader. Rick Violette was one of a kind – smart, tenacious and indefatigable. His commitment to horse racing was unparalleled. From worker's compensation to the racing program to the welfare of our workers, there was no area on track that Rick was not deeply involved in. The last four years have been a great education for me. Working with Rick, he taught me so much – the history of the game (both on and off track), the inner workings of the backstretch and the economics facing the modern trainer. I will miss him.”
Shadwell Farm

Violette's support of the New York breeding program was no more evident than in the litany of talented New York-breds he sent postward over the years, including multiple graded stakes winners Read the Footnotes, Samraat, and two-time New York-bred champion Upstart.

“I had the privilege to work with Rick for over a decade through many ups and downs in New York racing. His perseverance will never be matched,” said Jeffrey Cannizzo, Executive Director of the New York Thoroughbred Breeders. “Rick did so much tirelessly on behalf of his fellow horsemen. He stuck to his morals and always kept to his beliefs. I had the utmost respect for him and learned much from his actions. As I told him this summer, I'm glad we had the chance to see how good a horseman he truly was this year with Diversify. His support will be missed by all of New York.”

Through his nearly four-decade-long career, Violette recorded 870 wins and total purse earnings of $44,521,759. His final winner was Byself in an allowance optional claiming race on Sunday, Oct. 14 at Belmont Park.

Violette found perhaps his greatest passion, however, advocating for issues affecting horsemen and backstretch workers and the advancement of thoroughbred aftercare.

Statement from the Thoroughbred Horsemen's Association on the passing of Rick Violette:

“There aren't enough words to adequately describe Rick's contributions to the racing industry. Simply put, he was a giant of our industry and a consequential force, both in New York racing and the industry as a whole. Horsemen's leaders are oft criticized. Rick was beloved.

“There is not a segment of our industry that has not been impacted by Rick's work. He was consumed with the best interests of New York racing and the racing industry. He was a force behind the creation of the THA. He was, perhaps, the most consequential figure in New York racing over the past 20 years. He fought for the best interests of horsemen, backstretch workers, the health and viability of NYRA, the health and welfare of the horse, the integrity of racing and the care of our horses after their racing careers ended. He was instrumental in getting workers compensation coverage for jockeys. He protected winter racing at Aqueduct. He led reforms in racehorse safety and medication management of horses. He did not have a peer. He was tough, opinionated and determined. He was also a man of class and a gentleman. He was always a good interview for the media. He was beloved by everyone. Besides being a great leader off the track, he was also a damned good and respected horseman, who thankfully was enjoying the greatest success of his career before illness took him down.

“We are grateful that this past August, Rick's friends and colleagues honored him at Saratoga and announced the establishment of the Violette Award, a suitable honor to perpetuate his example. The Violette Award will identify and honor an individual in racing who, like Rick, has demonstrated a commitment to ensuring the integrity and best interests of racing, the preservation of live racing, the fairness of competition, the health, safety and welfare of the horse and rider, and the best interests of horsemen and backstretch workers. We will comb the industry to find an appropriate and deserving honoree.”

“With the death of Rick Violette, Thoroughbred racing has lost a powerful and effective leader who left an indelible mark on many segments of the industry. As the longtime head of both the New York Thoroughbred Horsemen's Association (NYTHA) and the Thoroughbred Horsemen's Association (THA), Rick was tireless in his commitment not just to horsemen's issues but also safety and integrity and jockey welfare as well as Thoroughbred retirement and retraining. Rick devoted his entire career to these and other important industry causes while at the same time becoming a very successful trainer on one of the nation's most competitive circuits. His substantial contributions to the industry cannot be overstated. He will be greatly missed.”