ROME, Italy--Laura Kraut and Jessie Springteen placed second and third in the 400,000 Euro Rome Grand Prix that chef d'equipe Robert Ridland described as "as tough a track in a grand prix as I've ever seen." 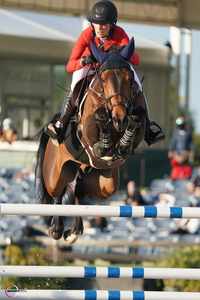 Only four riders, David Wills of Germany, Bertram Allen of Ireland, Kraut and Springsteen, were clean in the first round of the Grand Prix, so two riders with 1 fault and seven with four faults qualified for the jump-off.

Wills on C Vier 2 posted a very fast, clean round in 42.34 to win, while Kraut on Baloutinue finished in 44.76 for second and Springsteen on Don Juan van de Donkhoeve was third in 45.15.

Allen had a rail down but was the fastest of the four faulters to place fourth.

"I just got this horse in April, so this is a new ride for me," said Kraut of the 11-year-old Baloutinue. "This is only my third competition on him, but I feel like he's one of the most talented I've ever sat on. I got to know him each day, and he got better and better."

Kraut said that she had gotten Baloutinue from Katie and Henri Prudent, whose son Adam had ridden him, and that the Prudents were helping her on her road to Tokyo.

"THIS COURSE was definitely difficult enough," said Springsteen. "I was very happy with my horse. He gets better and better."

"I'm so honored to have been chose for the team to come here," said Springsteen, who said she is hopeful of getting a place on the team for Tokyo.

"There's still a bit to go, but I've got one of the most incredible horses I have ever had, so I'll try to stick to my plan, keep it up and keep my fingers crossed." she said.

"I think she has a great chance (of making the team)," said Kraut. "I have a very talented horse, and I'd be one of the most experienced on the team, and that might count towards making the team. I hope in a month we'll be sitting in a different country."

"It's hard to express how great it is to see these two do this," said Ridland. "The caliber of this field of 50 in the Grand Prix was the best in the world."

Both Farrington and Ward on their Nations Cup horses had 12 faults in the first round of the Grand Prix after Farrington had had two four fault rounds in the Nations Cup on Gazelle and Ward had been double clear on Contagious.

"McLain went early in the Grand Prix, and he said he would have ridden a couple of lines differently if he'd had a chance to watch a few rounds," said Ridland.

The original plan had been to send two five man teams to the selection trials, but the FEI, because of Covid having cancelled so many shows, had restricted each team to only four riders.

Devin Ryan's horse Eddie Blue, came up with a slight injury that means he cannot compete prior to Tokyo, and, while he will be fine to compete soon, that means Ryan is off the short list for the Games.

The Tokyo team will be named July 4.