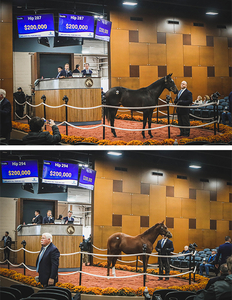 The sale certainly suffered from the rain from hurricane Ian that reached Maryland and Pennsylvania on Friday and hung on for five days.

"The weather didn't help us any," said Marshall Silverman, who sold a large number of yearlings as agent.

Rain began the Friday before the sale,and it poured Saturday and Sunday, while also being unseasonably cold, meaning it was very difficult for people to assess the yearlings before the sale.

It also poured on both days of the sale, meaning a lot of people didn't go to the sale.

"There were a lot of people who are usually at these sales who weren't here," said Silverman. "Plus, with the hurricane in Florida, people couldn't get flights."

"The good horses by Kentucky sires sold well," said Silverman. "The horses by a good sire out of a young mare with some pedigree sold well."

"The yearlings by Kentucky stallions like Munnings and Bernardini brought a lot of money," said Silverman."You could sell a local stallion's yearling if the mare had a good pedigree, but people around here don't spend a fortune for a horse."

"Plus, just because all the sales this year had broken records didn't mean this sale would," said Silverman. "The weather didn't help."

A filly by Uncle Mo (Hip 158) topped the Monday session when sold for $320,000 to Legion Bloodstock from the consignment of Scott Mallory, agent for Determined Stud.

The filly is out of G2 placed Andina (Ire), a stakes winner daughter of Singspiel, dam of five winners from as many foals to race.

Andina is already the dam of two graded/group stakes winning fillies in Australia Mia (Street Sense), a multiple Group 2 winner in Chile, and Andina Del Sur, by Giant’s Causeway, winner of the Florida Oaks (G3) and earner of more than $500,000.

Hip 158 was bred in Maryland by Determined Stud.

The bay filly was consigned by Northview Stallion Station, agent.

Out of Amie’s Legend, stakes winning daughter of Maryland stalwart Not For Love, Hip 157 is half-sister to five winners from starts, including stakes winner Ghoul’s Night Out, by Ghostzapper.

She was bred in Maryland by Two Legends Farm & Sycamore Hall Thoroughbreds.

On the second, Tuesday, session of the sale, Legion Bloodstock, agent, went to $200,000 to secure a daughter of the late More Than Ready (Hip 287) consigned by Scott Mallory, agent, on behalf of breeder Determined Stud.

A colt by Munnings (Hip 294) equaled the $200,000 session-topping price tag when sold to Summer Street from the consignment of Becky Davis, agent.

The chestnut colt is out of the winning Medaglia d’Oro mare Frost Fire, making him a half-brother to stakes winner Streetwithnoname, by Street Sense, and multiple winner Gunfyre Gal, by Gun Runner.

Hip 294 was bred in Pennsylvania by Jon Marshall.