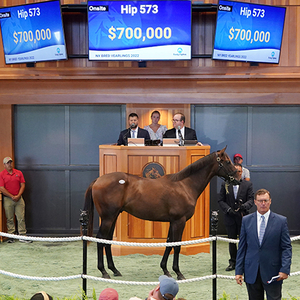 “Saratoga is a magical place,” said Boyd Browning, Fasig-Tipton president and CEO, reflecting on both the Saratoga Sale and New York Bred Yearlings. “It restores and invigorates the hope, the enthusiasm, and the love that we all have for the game.”

Pennsylvania and Maryland breeders are hoping the excitement generated by the two Saratoga sales will carry over to the Fasig-Tipton Midlantic Fall Yearling sale, Oct. 3,4 in Timonium, Md.

"Certainly, there’s market confidence and momentum that’s been created throughout the July and Saratoga sales, and it bodes well, I think, for the overall marketplace this year," said Browning.”

"I THINK it's a positive outlook for the racing community," said Patti Miller of Unonville, Pa., a sales agent for EQB who bought three from the New York bred sale, one through the ring and two post sale.

"The majority of the money at both sales was not foreign money, and it was mostly from people that race in the states." said Miller." I would think it would carry over."

The New York bred program certainly promoted interest in the sale, as New York writes races with huge purses for New York breds, but the Pa-bred and Md-bred breeders awards are also huge for both breeders and owners.

"The Delaware certified and Virginia certified programs are pretty healthy, too, with enough perks for breeders and owners," said Miller.

Another encouraging sign from both Saratoga sale is that there was a variety of buyers, not just a few big spenders.

Plus, the sales money was spread through the sales, with higher prices trickling down to the middle market, and the not solds percentage was remarkably low at both sales.

A COLT from the final crop of Arrogate, who won the G1 Travers in track record time, sold for a sale-record $700,000 during the final session of the sale.

Hip 573 is out of G3 Schuylerville Stakes winner Georgie’s Angel, by Bellamy Road, making him a full- or half-brother to four winners.

“It was so cool today to see Dan Burke, who’s been a lifelong breeder, raise a horse that brought $700,000,” said Fasig-Tipton President Boyd Browning of the sale topper. “He had a fabulous update, but he also had a lovely horse. I promise you, he’s on top of the world right now, just like he won a Grade 1 by selling a horse really well. The buyer’s probably thrilled, too.”

Nine other yearlings sold for $300,000 or more during the session, including:

Those nine yearlings all went to different buyers.

"I really liked that colt," said Miller. "I bought Central Banker as a yearling. I also bought Solomini as a yearling, and they stand at the same farm in New York. I bought one by Solomini post sale."

The sale topper was the second most-expensive horse ever sold at New York Bred Yearlings, behind only a $775,000 Malibu Moon filly sold in 2019.