Saratoga Sale's huge first day, with four selling for a $1 million or more

SARATOGA SPRINGS, N.Y.--Fasig-Tipton's opening session of its Selected Yearlings Sale on Aug. 8 broke all records, including selling four yearlings for over $1 million. 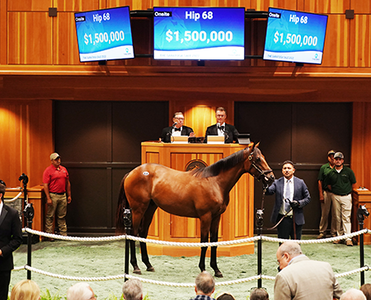 Sales topper Uncle Mo colt (Photo by Fasig-Tipton)One of those was a Pa-bred, bred by Blackstone Farm, hip number 78  by Justify out of Slews Golden Rule, by Landfuhr, consigned by Warrendale Sales and bought by M.V. Magnier for $1.1 Million.

David Wade, agent, had two bred by Northview Stallion Station of Chesapeake City, Md., go through the ring Monday evening, with hip 31, a filly by Mendelssohn out of Munny Spunt, by Munnings, bred in Kentucky, selling or $425,00 to Ken McPeek, agent fo Walking L. Thor, while hip 90, a colt by Bernardini was not sold, having not met his reserve of $135,000.

"You know what, I don’t do that very often, but I felt good. I felt good yesterday," said Boyd Browning, Fasig-Tipton President and Chief Executive Officer. "I feel good tonight and I think I’m going to feel good tomorrow night at this same time."

ALONG WITH the four million dollar sales, 16 yearlings sold for $500,000 or more, and all the evenings statistics were up.

“There was significant improvements in all the statistical categories," said  Browning. "We hit the superfecta,”

An even better figure for consignor was that buy-backs were down 19 percent from 26 last year to just 17 this year.

"An RNA rate under 20 percent is remarkable," said Browning. "Our goal is to have every one sold, and that was a good start."

“The results were very, very, very strong, from start to finish," said Browning. "You’re always thrilled when you have four horses in a session like this that sold for a million dollars. We had four last year in the entire sale sell for seven figures. We’ve already matched that number, and I have a sneaking suspicion that we’re going to eclipse that tomorrow night.”

The other three Million dollar sales included the sales topper, hip 68, Stop The Press by Uncle Mo out of a Tspit mare that sold for $1.5 million, hip 74, a colt by leading sire Into Mischief out of a Yes Its True mare, purchased by Hideyuki Mori of Japan for $1 million, and Hip 102, a colt by Into Mischief out of a Smart Strike mare bought by Spendthrift Farm for $1.1 million.

This is the first time a buyer from Japan had attended the Saratoga Sale, and Browning said that Fasig-Tipton rbought back Terence Collier, an announcer for Fasig-Tipton before he retired two years ago, to show the Japanese around Saratoga.

“I can’t wait for tomorrow, I’m really, really looking forward to tomorrow,” Browning said. “A lot of folks have said the way the catalog is, it’s alphabetical, they think tomorrow might be a little strong in terms of the quality of horses. Great start, but it all really relates to the quality of horses. A lot of folks brought tremendous horses here. I hope they felt like they got rewarded tonight. I hope that tomorrow night buyers buy what they think is another unique group of horses and sellers walk out of here virtually across the board with smiles on their face. That’s our goal."